DC is, at most, seven issues in on the new Rebirth titles. With Batman #7, we are getting the first crossover event, which will span Batman, Nightwing, and Detective Comics. Parts one and two are out this week, and part three will be out on 9/28 with Detective Comics #941. However, the events of issue 940 played a role in Batman and Nightwing. With the books already tied together in general, it makes sense to have the crossover encapsulate these three titles. 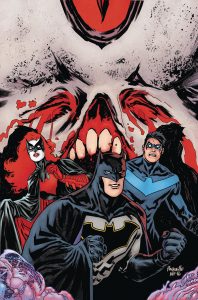 The title of the crossover is “Night of the Monster Men” and that title is a literal one. Batman, Nightwing, and Batwoman are greeted with panic in the city and humans have been turned into giant monsters. They know they’ll need all of the help they can get. At first, they only see one monster, but this is one of those times where it’s safe to assume it won’t just be one monster. We learn before Batman and co. that Hugo Strange is the mastermind behind the monsters, which Batman does figure out by the end of the issue.

Tom King was tasked with writing Batman for Rebirth, but he only contributed to the plot for this issue. Steve Orlando took over the task of writing the script, and it’s easy to tell that this issue is, for the most part, not the same creative team. It’s hard to understand why DC would have this happen so early in a series that was just starting to find it’s voice. Deron Bennett is the only constant as the letterer, which is great, but doesn’t exactly keep that same feel going as far as the writing and art go.

The story and art are by no means bad, they are just obviously different from the previous issues. The crossover will last for two issues in each title, and as October is approaching, the monster theme makes sense. If you’re a Halloween buff, you might find this story enjoyable regardless of who is writing and doing art on it. The story feels a little over-the-top at times, but it’s not detrimental to the plot. Riley Rossmo also has a grittier art style, which does fit with the setting and situation. Despite it feeling different from the previous issues, they make it work. Plus, Steve Orlando also handles the script for part two in Nightwing. That will help to keep the story feeling more consistent between the books.

Verdict: Check it out. You really need to see for yourself if this crossover will be for you, and naturally, it makes sense to start with part one. Some people don’t like it when new writers take over on books they’ve been enjoying, and others don’t mind. I’ll likely follow along with it just because I’ve been keeping up with the Bat-family books. It will be interesting to see how this all plays out. As someone who watches Gotham, a storyline with Hugo Strange will always pique my interest.