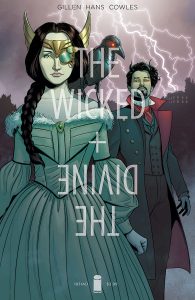 Thus far Kieron Gillen has kept the events of The Wicked + the Divine on a timeline of around three or four months. Keeping our cast consistent and familiar making each book an easy read month to month. So when a one shot titled The Wicked + The Divine 1831 popped up it brought a curiosity that could have waned a little by the time a series is around twenty issues. A one-shot like this however is a perfect way to not only break from but add depth to the story so far and what is to come.

One of the best decisions that was made for this single issue was changing the artist to Stephanie Hans. That alone makes this issue stand out for the series as a whole. The first page is a breathtaking full page splash of a dying character. Hans art has a lovely brush stroke art style making each panel feel as if it were shrunk down from a larger canvas that once hung on a wall. With the story focused around the four remaining gods of this cycle Hans brings unique mannerisms and a diverse range facial expressions to each character. During one particularly tense sequence our leads decided that they are going to attempt to raise a fallen friend. The five pages that follow are beautiful, hectic and a little scary. The use of color contrast across those same pages mixed with the facial expressions of the characters makes for a really smooth and engaging read. A really affecting moment comes after the gods have raised their friend. Lucifer is extremely satisfied with himself and then when the raised god places his hand over Lucifer’s mouth. The pure terror of having the realization that Lucifer is having can be seen in his eyes. While not the biggest or the flashiest, Hans has a way with eyes. She is able to illustrate the way we convey emotion through them and have those reading
experience emotions because of them.

Lucifer like the other gods just can’t seem to catch a break regardless of time period when it comes to being murdered. That’s not the only consistency that this book picks up on though. The characters in this issue are familiar to us and Gillen is able to really bring them out regardless of outward appearance. Even with the english being just a little flowery the characters that we know still come through. Giving readers the impression that the cycle is really just that. A continuous loop that all of theses goods are doomed to inhabit forever. Each time being reborn and not remembering their former lifetimes. Knowing what we know about Ananke from previous  arcs seeing her destroy the gods all over again is heartbreaking and also strangely insightful. Getting to peek in on the end of this cycle and see just how she cleaned house makes this an exciting read.

Verdict: Buy. Often times a change of lens like this is jarring and leaves the reader wanting more. Gillen however is able to provide a one and done story that is equal parts creepy, tragic and insightful. Even if you aren’t a regular Wicked + Divine reader this is still an excellent short story. On top of being a well written story it is also full of good and clever ideas. From the art change being appropriate for the time period and the story being crafted to add depth to what’s already come there isn’t much more you can ask of a one-shot. Yet between the literary remix,  people and places that the gods inhabit Gillen manages to add one more layer to the already complex story.