In this retelling of Shakespeare’s Macbeth, Toil and Trouble, the reader is introduced to Smertae, a witch banished from Scotland for the last nine years. Once she’s returned, her and her sisters, Riata and Cait, meet to discuss the future of Alba ( commonly known as Scotland). Together, they are the conduit of Fate, guiding the outcome of a war that would dictate the next ruler of Alba. The premise, while familiar Shakespearean fantasy, provides a refreshing look at the witches behind the madness of the events in Macbeth. 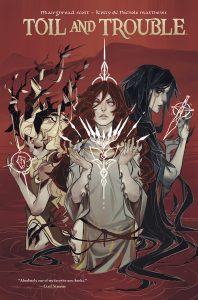 The first two issues focus on Smertae’s conflict of protecting her land and the people who reside in it. While Riata aids the Norwegians in spite of the people of Scotland who no longer respect the superstitious “traditions” no longer paying tribute to the “gods.” Riata wishes to have the foreigners run Alba because they pray to the gods that she could take the place of and be worshiped. Smertae stands in the way of Riata’s plan.

The inconsistent pacing in the first two issues between the witches and the armies that land on Alba makes the book hard to enjoy. The witches plot is intriguing because of Smertae’s underdog characterization of her minority effort to serve the people of the land. The drama that ensues  with her return from exile and meeting with Cait and Riata creates an id/ego/superego dynamic. Riata is the superego competing for the loyalty of the people of Alba, while Smertae serves as the opposition. Cait serves as the mediator of the group. She assesses the needs of both the other witches and the war to provide a fair outcome. Matthews and Matthews’ art shine in these moments detailing Smertae’s strife, Cait’s arrogance, and Riata’s conscientious temperament.

The real issues are found in the moments when Smertae is an observer. The dialogue, at times, is trying to remind the reader that this is a Shakespearean tale, but without diving too deep into Shakespearean language. Scott’s approach to the language is meant to be authentic of its source material, but at the cost of entertainment.  The conversations are bogged down by the language and the characterization of Macdonwald, Macbeth, and others gets lost because of it. In these moments, the art takes a step back for generic fantasy imagery.

The scene of the prophecy, beautifully drawn by Matthews and Matthews, combines the strengths of this book. The supernatural beings are given a chance to view Macbeth’s different possible futures. This causes more friction between the witches and gives Macbeth a chance to look into the supernatural side of this world. The awareness of his fate allows the reader to find their footing in a story that is all too fantastical. It’s a revelation of utmost importance, but it doesn’t give Macbeth the chance to use the information as any significant plot device or character development.

This is the most frustrating aspect of the mini-series because the team gets so much right. The big moments are visceral and exciting, but they don’t feel like they’ve been earned. The creative focus needs to be directed to the smaller moments and smaller characters to create a more intimate storytelling. This would allow the reader to have emotional investment in  the human characters equal to those of the supernatural ones. The book needs to be tightened up, but it’s charm is not to be denied. It’s a concerted and admirable effort to tackle an adaptation of one of the most widely regarded writers of all time.

Depends. It’s not perfect, but it’s enjoyable if you appreciate fantasy based drama or are interested in seeing a comic book adaptation of a Shakespeare play. It’s a complete series that tackles issues concerning Fate/Free Will, family, war, culture, and redemption using a story written hundreds of years ago. The love for Shakespeare is most certainly there by writer Scott and artists Matthews and Matthews. It can be felt throughout the series and despite its idiosyncrasies, it captures the spirit of the towering reputation of its source material.