Wrath of the Eternal Warrior #11 Review 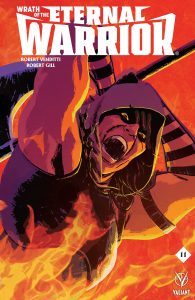 Bad Parenting. It’s a staple of growing up, as there will always be moments where your parents mucked up, at least slightly. My parents have never ignored me for eons, like Gilad has in this comic, but when your brother cuts half your hair off and you get the blame, you can’t help but feel a little injustice.

I am relatively new to the Valiant universe, so when I saw that Eternal Warrior was starting a new arc I jumped on board. I have said this before, but I just love myths and Gilad (the Eternal Warrior) reminds me of the Greek mythological heroes. An ancient warrior that resurrects and has children across ages? He sounds like a less twisted version of Hercules.

Venditti does a good job catching up readers, through Gilad talking to X-O Manowar about the story so far, but also the relationships. The story so-far page, for those who haven’t read anything up to this point, is still necessary to fill in the base knowledge needed. Venditti does what he does best in this issue and writes deep intriguing characters, showcasing their personalities for new readers with lines such as Gilad stating ‘I’ll decide when my days of being the eternal warrior are through’.

The villain for this arc is introduced at the end and it left me feeling indifferent but that might be my lack of knowledge. I hope the medusa spider hell dogs (I know that’s not their name but it might as well be) will get more development though, for this to truly be a jumping on point for readers.

Gill’s art paired with Spicer’s colours is a good standard, reaching its heights with the title page, which is packed with emotion. Also Gill’s layout of the flashback pages, are like memories having a free flowing aspect to it that elevates the art.

This issue boils down to a father trying to find and reconnect with his son and Venditti hits the emotional beats, showing how Gilad may be the eternal warrior, but parenthood is lost on him.

Give it a shot. Overall this is a good comic and a decent jumping on point. The character building and development shined through in this issue; Gilad’s efforts to reconcile his past behavior would put him in the pantheon of Greek heroes, as they are all basically really bad fathers. However, the villain’s introduction came across as an afterthought and didn’t get me excited about reading them in the future.