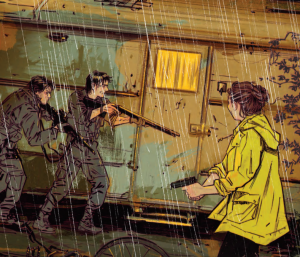 “A woman in this life, every day is a test, every thought is a judgment, every action is a compromise.”

The comic book corner of the Internet has been brimming with anticipation for Briggs Land #2. The series’ second issue provides suspense, intrigue and some of the scarier and entrenched aspects of society.  Grace deals with the ramifications of an assault on her home, in which Isaac, her loyal son, is nearly killed.  She’s also forced to negotiate with her somewhat estranged other two sons, Noah and Caleb.  So begins the internal power struggle for Briggs Land’s economic and security interests.

Brian Wood is sculpting a story that serves as commentary on a strong woman in a world that doesn’t embrace change lightly.  Grace constantly struggles with the ramifications of transforming a patriarchy into a matriarchy.  Noah and Caleb’s concern over the mere appearance of subservience to a woman makes them look like adolescents cloaked in adult skin.  In this way, Briggs Land has a feminist-friendly narrative: most of the men of this community, for all of their guns, bravado and patriarchal tendencies, are not characters with strong fortitude.  Wood actively pours salt in the gaping wound of the status quo, addressing the fragility of ‘good ole boys.’  Wood’s narrative might turn off some readers.  However, this is a group that is perhaps already on its way out of reading comics, as the industry demonstrates that it’s listening to an audience that increasingly clamors for challenges to the status quo.

The writing is terse; there isn’t a lot of flowery prose. This fits the mood and the atmosphere in Briggs Land.  It’s a world where time is short and you have to shoot straight, in more ways than one, if you want to stay alive.  Wood should be applauded for his somewhat restrained writing – it appears that he cares more about telling this story naturally than showing off his writing chops. Each character is fully realized, even if we only have a minimal amount of backstory on them.  Most of them are despicable people that you wouldn’t want living in your neighborhood.  Yet, they feel like real people of our society – even if they belong to its fringes.

We do learn a little more about Grace here.  She’s out of touch with what’s going on in the village on her territory, and the plight of the regular people who live there. Not only is this a sterling example of when a comic book echoes real life, but it also demonstrates Grace’s humanity as she seeks to help a woman that’s facing domestic abuse and appears to be forgotten by the community.  In another life, you get the feeling that Grace might have been a really nice person.

Mack Chater and Lee Loughridge’s art and colors are in sync with Wood’s writing: they are subdued throughout the story. That doesn’t mean they’re bad, it means that they effortlessly compliment the writing. The world in Briggs Land has a sterile, hopeless feeling in the air. Loughridge’s coloring captures a disconnected community where misery is commonplace and doomsday cultism litters the air. There’s one particularly effective section of panels about one-third of the way through the issue where there are snapshots of a morning routine with no dialogue used to transition the story along. It culminates with a close-up of Grace’s pistol lying on the counter, next to her makeup accessories.  In one snapshot, it shows the juggling act that Grace has to perform as matriarch and protector of Briggs Land and her family.

Verdict: Strong buy. The end of the issue hints toward Grace’s edgy past.  The question, “What did Grace do when she was 15?” will linger with readers after they’ve put this issue down.  Despite a lineup of extremely flawed characters, this book is a joy to read.  It’s easily on the cusp of becoming the next great, new series. The writing and art compliment each other throughout this second issue. If you enjoy realism and real-life society issue in your comics, then hop aboard the Briggs Land train. There’s still plenty of room on the bandwagon.