Wonder Woman returns with its third installment of the Year One storyline. In this, Wonder Woman and Steve return when their cloaked plane lands on the beach. Steve calls for a police escort back to the naval base in Coronado. The story mostly remains there for the duration of the issue. Steve only leaves to visit Maya, the wife of his fallen friend, Nick. Dr. Minerva receives a note and arrives at the base. One doctor already attempts to get through to Diana, but has no luck. Dr. Minerva makes a connection and figures out what Diana is saying, even with Diana speaking a bit too fast for her. 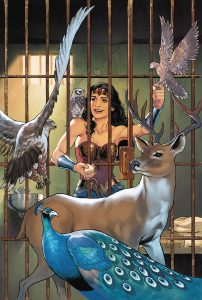 With the general plot covered, let’s talk about the art. Nicola Scott does a stunning job with Wonder Woman. She perfectly captures her mood and thoughts with each panel. You feel the tension when she first arrives at the base and you feel the excitement that she feels when she first sees Steve after being put in the cell with the way Scott focuses on her facial expressions. Plus, Rucka and Scott already worked together before and it’s clear they make a great team. Rucka does an excellent job with writing a story with a language barrier, even if it’s one we don’t deal with. He makes you feel that struggle even though we get to read it all in nice, plain English. There are not enough words to describe how enjoyable this team has been.

Wonder Woman feels like one of the strongest titles in Rebirth. Switching between two stories makes it so you don’t get tired out by one or the other right away. It’s worth noting that Rucka and Scott aren’t the only two who make this story great. Romulo Fajardo Jr. is on colors and he keeps things pretty light despite Diana being stuck in a cell. The single page where Diana sees the Gods as animals is a prime example of how outstanding his colors are. It’s easily a highlight page in the book, especially with the variety of animals, Diana, and the shining light coming from the palace (if that word even justifies that living space).

Jodi Wynne puts a nice touch on the lettering when Dr. Minerva comes to talk to Diana and is speaking much more slowly than the princess. It’s a fun little addition to the dialogue and it’s easy to distinguish when they are speaking a different language because of the inner outline.

Verdict: Buy. There’s really not enough praise for this book. It’s easily a popular title and it’s hard to wait every other issue for the storyline, but it does keep it exciting with the switch. Wonder Woman is a fantastic character and this creative team does her origin story justice. Some may think it’s done more than necessary, but then again, all of the characters have that happen at some point. What really matters is how well the story is told, and Rucka and Scott tell this one well.