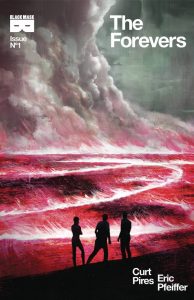 Curt Pires’ The Forevers #1 begins in media res with five friends putting the finishing touches on a black magic ritual guaranteed to bring them everlasting fame and fortune. But of course everything comes at a price. Smash cut to a decade later and two of the friends–one a successful rock star, the other a lauded actress–are seeing their once bright futures being slowly snuffed out by a dangerous cocktail of drugs, self-loathing, and depression. And by the end of the first issue, one of the friends will be brutally murdered.

Pires’ writing comes on strong and never lets up. His dialogue is bold and brash and his characters–at least the two that get the most attention in this inaugural issue, Jamie and Daisy–are hitting the self-destruct button on their own lives. Neither character is particularly likable yet both are such compelling trainwrecks that it’s hard to look away as the issue barrels toward its brutal whodunnit finale. Kudos to Pires for investing so much of this issue into characterization over jumping right to the bloodletting that cripples a lot of these kinds of thrillers. Now as much as I want to solve this murder mystery I also want to meet the rest of the characters because I’m invested in both aspects of this story.

Helping to establish such strong personalities in this first issue is Eric Scott Pfeiffer’s photorealistic art style. These characters look like living, breathing people. Pfeiffer’s art gets a bit into Uncanny Valley territory at times but for the most part each character is drawn with a distinct look and feel that helps to establish them perfectly in the story along with Pires’ script. His colors are equally impressive as Pfeiffer gives the book a tremendous life, from the opening bonfire of the black magic ritual to the various club sequences that look almost dream-like. Colin Bell has a lot of dialogue to deal with from Pires but manages it quite nobly, never distracting from Pfeiffer’s stunning artwork. All-around, The Forevers #1 is an impressive-looking book.

Buy! I’ve never read a Black Mask Studios book before and I’m glad The Forevers #1 was my first foray into the publisher because it makes me definitely want to check out more of this publisher’s lineup. While the solicitations for The Forevers promises a much more supernatural-driven science-fiction murder mystery, this first issue is definitely more character drama with a bit of a thriller bent tossed in toward the end. For me this makes it an entirely more compelling read because now I know exactly who at least two of the characters are and I can’t wait to learn more about the rest of this eclectic crew.