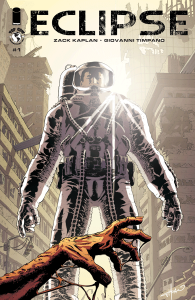 “Sun will melt your skin off,” reads the first caption in Eclipse, set in a world where being outside during daylight hours is dangerous. To survive, humans live underground, braving the surface only under the cover of darkness. But while most people avoid fire, some brave it for the greater good. So it is for protagonist David Baxter, a modern-day fireman of sorts who does outdoor daytime repair work in New York City in a heavy protective suit.

The plot kicks off with the discovery of a grisly murder committed in daylight, which Baxter is roped into helping solve. The creators deftly accomplish the tasks of moving the reader through the mystery, dropping hints about the main character, and filling-in details about this world, wasting no space in the twenty pages of the comic. Eclipse #1 is a book where the dialogue, narration, and art all fit together well in service of the story. At times conversations or action between minor characters do some of the work, such as when Baxter’s colleagues speculate on who is responsible for the murder, or when he ignores a mugging that takes place outside his apartment.

Giovanni Timpano’s art, which feels similar at times to Frank Quitely’s, is equally impressive whether the page is showing an underground bustling with people or an eerily deserted daytime Times Square. The artist’s skilled use of many perspectives in panels also adds much to the narrative of the book, especially in the last few pages when the action picks up. Small details, like the reflection of characters in a shard of broken glass, add a delightful layer for readers who pick up on them. The horrific scene showing the murder victim is (in the best way) like something out of True Blood: what you’d expect the scene to look like if you stumbled upon it in real life.

In a story where the sun plays such an important role, the portrayal of physical light and darkness needs to be on point, and thanks to the work of colorist Betsy Gonia, it is. From the first shot of daylight to the familiar glow of a television set in an otherwise dark room, the colors are essential to setting the tone of the book’s various environments. They are also critical in the final action sequences of the book, as the ability to stay in shadow instead of exposed to sunlight is the difference between life and death. Gonia’s coloring adds a level of immersion: in places the darkness is obscuring or the light is harsh, just as it is to the characters.

After ending on a cliffhanger, this first issue also features a substantive seven-page look at the process that went into its creation, including unfinished art and commentary from both the writer and artist.

Verdict: Buy. Eclipse #1 is a sci-fi murder mystery with an innovative twist and a combination of great writing and art. If you’re looking for a quality comic book that’s new and different, you’ll want to pick it up.