Mild spoilers ahead (will announce exactly when, with similar bold font).

“Superman is for everybody!” 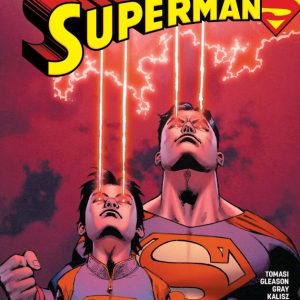 Peter J. Tomasi, Patrick Gleason and the rest of the art team conclude the Eradicator arc with Superman #6: Son of Superman. Superman and the Eradicator square off one final time to determine the fate of the souls of imprisoned Kryptonians and Superman’s son, Jon. The story is more Superman-centric, with the previous Superman #5 giving a lot of the spotlight to Lois and Jon. Various characters have their moments, but story focuses on what Superman means as a character. His protective nature and goodwill are on full display, leading to a feel-good and satisfying conclusion.

There are several iconic moments and lines of dialogue throughout the issue. Our hero gets the better of his insidious foe here, as is often the case at the end of a story arc. Superman really puts the hurt on the Eradicator, and every close-up panel of the action is wholly satisfying. Even as Superman and the Eradicator cause significant destruction during their epic fight on the moon, the dialogue from all characters involved feels natural.

The artwork, as with the previous six issue on this series, is simply stellar. John Kalisz’s colors, particularly red, blue and gold, light pages that contrast with an opaque background of cosmos and dark matter. Glorious splash pages mark the first and final pages of this issue. Superman looks powerful and intimidating when pummeling the Eradicator, but also looks appropriately regal and good-natured when speaking with his family and addressing the public. Each character’s facial features appropriately match the scene’s mood and action. There are several splash pages throughout the issue, and the one at the story’s conclusion is everything that a comic book should be.

Superman helps fully realize the Eradicator’s demise by rescuing his dog, Krypto, from the villain. Freed from the Eradicator’s clutches, Superman and his trusted hound use both fighting skill and well-placed humor as they win the day. It’s one of the most artistically satisfying scenes that you’ll come across in a Superman comic. The final splash page depicts Superman introducing Jon as Superboy to Wonder Woman and Batman. The heroes all wear some varying look of satisfaction… except for Batman, who can’t hide his skepticism.   Why should we expect any less from Bruce Wayne?

Strong buy. This final page suggests that Wonder Woman and Batman will play significant roles in the upcoming Superman storyline. Comic readers that aren’t reading this series are fresh out of excuses. The dialogue, the emotive tones and the artwork all work in unison to deliver a fresh, pump-your-fist-in-the-air Superman story.

I don’t like to write in the first person with my reviews, and I won’t make a habit of it. But I’m making an exception here. Why? Because my dad is a big Superman fan, but it’s fair to say that it’s been decades since he read a Superman comic. When this first arc becomes available as a trade, it’s going to find its way into his Chanukah present pile. It just so happens that his favorite character is the heroic lead in what I think is the best ongoing DC series post-DC Rebirth. Hope you’re not reading this review, Dad!