Reviewed while taking down a glass of Bordeaux.

“There are no famous people… it’s all just meat!” 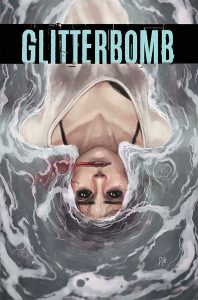 Farrah Durante is washed up in more ways than one. The aging actress attends one audition after another as she struggles to survive in Hollywood. To save her career and herself, Farrah will have to take revenge against those who’ve kept her out of the spotlight. Will she find the strength within herself or will she require a bit of sinister assistance?

The title, Glitterbomb, seems to be a mischievous misnomer, as there is nothing sparkly about this first issue. The new series from Image Comics blends real life drama and horror in ways that will leave the reader wondering which is worse: becoming a flesh-eating monster, or being unable to provide for your young child. At this year’s Image Expo, series writer Jim Zub described Glitterbomb as, “a caustic look at what celebrity culture tells us to value and the shallow nature of notoriety.”

The first issue of Glitterbomb takes aim at Hollywood’s blatant disregard for middle-aged women as the reader is confronted with the grim reality of Farrah’s daily life. Zub does a great job balancing helplessness and hopelessness by trapping a protagonist in a difficult situation but also providing the agency for her to assert herself. The reader is left rooting for Farrah rather than feeling sorry for her.

Newcomer Djibril Morissette-Phan is listed as the series line-artist, which is an apt description as the art in Glitterbomb feels very restrained. He has a deceptively simple aesthetic reminiscent of David Aja. In this issue, it conveys a sense of bleak monotony that follows Farrah and heightens the sense of terror as she fails to control her actions. The color artist, K. Michael Russell, adds a mostly subtle palette and minimal texture to the issue.  Russell described his contributions by saying that, “even when the sun is up, it never feels like a beautiful day in this book. Something always feels…off.”

While all of that is great, the best thing about this issue is the back matter; it includes an essay from Holly Raychelle Hughes entitled, “An Oscar Winner Bullied me so Badly that I Quit the Film Industry.” Hughes provides a detailed and infurating account of her experiences managing a film production office. As she recalls multiple accounts of verbal and emotional abuse, the reader can easily see the parallels between Hughes and Farrah.

Glitterbomb #1 dives head-first into the shallow world of LA’s fame-obsessed culture. It uses biting commentary to paint a grim picture of the daily life of a working actress. But make no mistake, this is definitely a horror comic. Like all great stories in the genre, it reveals more about the human condition that it does of its villain.

Buy Dis! – This review is definitely short on plot details and it’s no accident. The less you know about Glitterbomb, the better. If you like your horror with a healthy dose of commentary, then this is the new series for you!