Rise of the Black Flame #1 Review 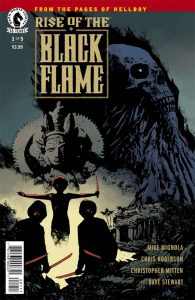 For a supernatural police procedural set in the Mignolaverse, Rise of the Black Flame #1 plays it relatively calm out of the gate. This is especially surprising given the insane amount of macabre pedigree spread across this issue’s creative team, from the co-writing tandem of Hellboy creator Mike Mignola and iZombie creator Chris Roberson to seasoned 30 Days of Night artist Christopher Mitten drawing the interiors. You expect the staples of this book to be dripping blood with a team like that, but it’s a rather subdued affair. While Rise of the Black Flame #1 does show signs of promising eerie hijinks to come over the rest of this five-issue limited series, this introductory chapter never quite makes a strong enough first impression beyond its intriguing premise.

Girls are going missing all across 1920s Siam and clues recovered at the crime scenes seem to point to the mysterious Cult of the Black Flame as being responsible for the abductions. Who in their right mind wouldn’t be roped in by that setup? It’s just unfortunate that the plot involves characters far less interesting than what is going on around them. I’m all for taking ordinary people and forcing them into extraordinary situations but the trouble with the protagonists in Rise of the Black Flame–Sergeant Geoffrey McAllister and Constable A.N. Sandhu–is that both seemed versed enough in the occult to understand the clues they find but also not enough that they require assistance later on in the issue. Not to mention the two women that offer to assist our less-than-subtle protagonists are the far more interesting supernatural adventurers we should have been following the whole time.

Whenever Rise of the Black Flame #1 does dip its toes into the world of the fantastical, it’s through brief flashback snippets that are all beautifully constructed by Mitten and colorist Dave Stewart. Mitten’s talents for penciling more supernatural elements shows in these sequences with some truly terrifying creature and villain designs, particularly the figure I have to assume is the titular Black Flame. Using a muted color palette and dark black inks for these scenes, Stewart provides a perfect contrast to the current events of the book, which are rendered with a much brighter swath of colors. As this series descends into the weirder world it lays out toward the end of the issue, the art team on Rise of the Black Flame is going to more than up to the task if this first issue is any indication.

Wait and See. Rise of the Black Flame has a lot of promise but this first issue is a rather slow-burn starter. Those that have faith in Mike Mignola and Chris Roberson to deliver a worthwhile entry in the Mignolaverse should pick this issue up, but don’t expect the type of macabre craziness that is associated with both creators, at least not yet. Those with only a loose connection to the Mignolaverse might be better to wait until this title comes to trade.