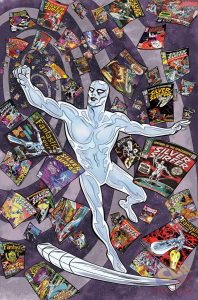 Barring an extended page count and a special superstar cameo, the historic 200th issue of the Silver Surfer is just business as usual for storytellers Dan Slott and Mike Allred, and that’s perfectly alright with me. Although they haven’t been with the series very long comparatively speaking, Slott and Allred have already etched themselves in the pantheon of the Surfer’s history as far as I’m concerned. This 200th issue spectacular serves as a friendly reminder to those already on board (pun intended) as to how great this run has been, but it is also, curiously enough, a decent-enough jumping-on point for new readers to give this much-loved series a go. Not only does it adequately summarize all the recent goings-on in the world of the Surfer (not an easy task, mind you) but it gives new readers a wonderful representation of why Dawn Greenwood is, quite simply, the best.

Dawn’s infectious enthusiasm for adventure has been a staple of the series since the start, and here as she recounts her time as the Surfer’s “companion” (to borrow a fitting Doctor Who term) it’s hard not to share in that excitement with her. What follows toward the end of the issue is therefore one of the more heartbreaking moments in this series and that’s saying something considering the Surfer died only a few issues ago. It’s a testament to just how well Slott and Allred have done by the character of Dawn Greenwood. Sure, the Surfer has a significant role in this issue fighting off fear-inducing creatures with special guest star, Spider-Man, but the backbone of this issue is Dawn coming face-to-face not with any foe but with her own long lost mother. How she handles the situation, not with anger but with forgiveness, is a demonstration of how Slott and Allred manage to imbue such a feeling of hope into this series through Dawn’s eyes. It’s hard not to actively root for her.

Of course the fact that this book (and series) is illustrated and colored by the wonderful Allreds does wonders to the emotional resonance felt through the characters actions. Dawn’s expressiveness is particularly empathized by Mike Allred’s stunning pencil work while Laura Allred’s colors give her just enough brightness against even the darkest times. The way the Allred’s are even able to transpose that emotion onto the Surfer himself is remarkable. Whether he’s annoyed at Spider-Man’s constant quips during battle or shocked at the return of some his prior foes, there’s always an expressiveness to be found even on a character thought as more somber. But in the hands of the Allreds he is anything but that.

Buy! Silver Surfer’s 200th issue spectacular is a lot less looking back on the past and more business as usual but when business is this good, that’s not a bad way to go. There’s a special guest star in this issue that lends to some humorous interactions with the Surfer but the real star of this show is Dawn Greenwood. She continues to grow as a wonderfully complex character, one that I look forward to seeing almost as much as the Surfer each month. If you haven’t already come aboard this wonderful series, this issue is actually a decent jumping-on point, so now’s your chance.