Written by B. Alex Thompson

The horror genre can be a very challenging genre to review at times. It can be, at times, like grading on a curve. Many horror movies could easily rank in the mix on many Top 100 movie lists, despite not having the same level of acting, directing, budget, etc. Is it the same for horror comics? 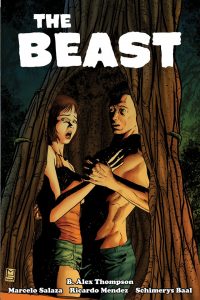 The Beast #1, which is a book by Approbation Comics, is a good book to look at when trying to answer the question above. It has a decent concept. You first see a character that is trapped underneath of a dead bull/werewolf looking creature that he has fortunate enough to kill. He can’t get loose and he is visibly terrified. Flash back to a few hours earlier when this character along with a handful of other friends have arrived at a campsite ready for a weekend of college debauchery. Throughout the story, you alternate between the present and a few hours prior as you see how the story develops.

This concept and manner of telling the story was clever enough and on its own, effective. It was the rest of the execution that fell flat. The writing, particularly the dialogue, goes out of its way to try and earn that 17+ rating. The use of the language isn’t the issue; it is the overly flat and gratuitous manner of the delivery that is cringe worthy. Also, the character motivations in this book are consistently puzzling at best and sensationally unrealistic at worst.

These things would be easier to overlook if it was beautiful to look at. Unfortunately, it isn’t. It somewhat looks like Barbie and Ken dolls on a page interacting with each other.

Verdict: Pass. It is easier to be lenient on a book within this genre, and the concept and manner in which Thompson elects to tell the story is solid. It’s the rest of the execution that falls flat.