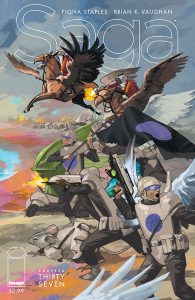 By now, we shouldn’t be surprised. And even so, thirty-seven issues in, Fiona Staples and Brian K. Vaughan’s incomparable ability to deliver an emotional wallop in a single panel continues to amaze. In the case of Saga #37, it comes in the form of an opening splash that in so many ways encompasses everything that makes this series work: we see Hazel, curled in lavender sheets, surrounded by luminescent petals as her ever-growing wings unfurl behind and, so subtle that it’s easy to miss on the first pass, a single trail of drool slips from the corner of her mouth. “Families are goddamn wildfires,” Narrator-Hazel whispers in the background, and with that, we are officially back.

Compared to both the violence of it’s cover (we’ll get to that) and to it’s preceding installments, Saga #37 is in many ways a restrained issue, offering more setup and character study than practical action. If the story thus far has been any indication, however, we already know that such a move plays to the strength of this creative team. In just shy of forty issues, Staples and Vaughan have cultivated a near monopoly on the beautiful tension that lives in the quiet before the storm.

This installment is no different. As foreboding of a coming conflict dances around our characters, they each contend with more immediate, more deeply personal concerns, affording us as they do a glimpse into yet another layer of their already remarkably tangible internal lives: Marko and Alana watch over their recently-reclaimed sleeping daughter, discussing the impending arrival of another family member with a balanced combination of joy and anxiety; a simultaneously hilarious and heart-wrenching exchange between Petrichor and Izabel hints at the long-overdue development of the former as she begrudgingly reveals her more deep-seated anxieties about her new companions and their potentially hostile reception of her gender identity. As we shift from scene to scene, we are reminded of just how expansive this universe is, how invested we have become in its many players, and how much more is left for us to discover.

Much of the joy in reading Saga comes from its shockingly irreverent humor. Vaughan’s penchant for shifting from innocence to raunch with little warning is on full display during a brilliantly paced series of panels that seamlessly transforms our protagonist family’s wayward spacecraft into (Former) Prince Robot’s erect, remarkably human robo-member so quickly we can barely keep up. His wandering imagination and internal conflict play out across his monitor as he struggles to (in his own words)  “clear out this cannon,” and the result is as hilarious as it is startling. And yet, such a brief, seemingly overtly comedic scene belies the Prince’s very earnest ongoing battle with his trauma. As a writer, Vaughan truly excels in his ability to insert humor without overriding its surrounding sentiments. Once the laughter dies, once we catch our breath, we come to recognize the duality of emotion that lives inside every one of these moments, the same duality that colors so many of our own every day experiences. That’s what makes his character so recognizably (for lack of a better word) human.

Ok, but seriously. That cover. That COVER! Never before has an image (no pun intended) screamed “BUY A PRINT OF ME” louder than the front-and-back-spanning battlefield collision that serves as this book’s exoskeleton, a cocktail of all the pastel sorcery, techno-armaments, mystical beasts and bloodlust we have come to know and love. It is a franticly beautiful piece, and one more testament to the genius of the somehow-consistently-improving-despite-already-being-incredible, Swiss-Army-Knife of an artist that is Fiona “I Can Make Anything Look Gorgeous” Staples.

When all is said and done, Saga’s return is nothing remarkable, in the sense that it is every bit as remarkable as we have come to expect Saga to be. With consistently emotive and evocative artwork, gracefully scripted, relatable characters and narratives, some of the most authentic and organically diverse representation across gender and sexuality and race (and species), and a seemingly unending reserve of sex and violence, this series continues to be the benchmark for everything a creator-owned comic is capable of being. Which begs the question (to us and to every one of the characters we follow)…where do we go from here?

BUY. This and all thirty issues before it. It will be worth every penny and minute or your respective money and time.