The Legend of Wonder Woman #9

Reviewed by Jesse Bowden while blasting the Hamilton soundtrack 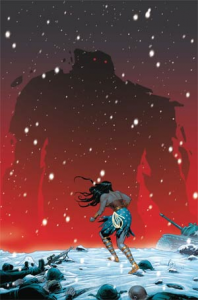 In the year of her 75th anniversary, Wonder Woman fans have had a lot to celebrate. We are a year out from the character’s big screen debut, and if you can manage to stop watching the trailer on repeat for more than 10 minutes, you can now read 3 new and distinct versions of our heroine’s origin story. While tastes may vary, few have denied the excellence of DC’s Legend of Wonder Woman.

The Eisner nominated series, written and drawn by Renae De Liz, follows in the digital-first footsteps of Sensation Comics featuring
Wonder Woman, an anthology series from a variety of creators including character veterans Gail Simone and Trina Robbins. With The Legend of Wonder Woman, Renae De Liz takes complete control of the character’s origin; she presents a contemporary reimagining that pulls elements from the Golden Age work of Wonder Woman creator, William Moulton Marston. The series has focused on Diana’s transformation from an inquisitive child into a formidable superheroine. De Liz has said that she wanted her story to be accessible to readers of all ages, a goal that she has certainly achieved.

In issue 9, we see Diana come face-to-face with the dark force that she first sensed on Themyscira. Amid the destruction Diana is pulled into the mental plane, by an unknown force. She is met by the mother of all creation and the full weight of her purpose in the universe. Diana hears her call and as always, she answers, “come champion, challenger, and purveyor of truth… it is time for you to awaken.” Especially in this issue, De Liz makes complex and nuanced contributions to the Wonder Woman mythos. The themes of sacrifice and destiny are on display as we see a Diana that is willing to give up everything to protect the world that she loves.

De Liz also deserves credit for introducing Wonder Woman’s most iconic supporting characters to a new audience. Her Golden Age inspiration is clear in the characterizations of Steve Trevor and Etta Candy. Throughout the run her Steve Trevor has been drawn as a blonde-haired, blue-eyed dream boat. Even as she stands taller, Steve is a confident hero who pursues Diana with patience and compassion. Also making a return to form is Etta Candy. Diana’s self-assured best friend is written as a creative, curvaceous confidant, who is equipped with plenty of sass and encouraging words. In this issue, the two of them team up. While Steve flies a WWII bomber, Etta uses a machine gun to shoot Nazis out of the sky. These moments could easily feel ridiculous, but De Liz’s writing imbues the story with a sense of adventure that makes everything feel believable and fun.

High-flying action is only one of many artistic high notes in this issue. De Liz and her husband, Ray Dillon, are a fantastic visual storytelling team. Diana’s final battle with the series big bad, will leave readers feeling breathless as the two knock each other through pages of wordless panels. In the quieter moments, Dillon’s work shines in Diana’s inky black hair and bright blue eyes.

At the issue’s end, Diana’s future is bit unclear. Fortunately, readers will be able to follow her adventures in The Legend of Wonder Woman season two. Without a doubt, Renae De Liz will continue to show the world a version of Diana that we’ve all been waiting for.

Buy the Trade – As a Wonder Woman fan, there’s so much to love about this series. Renae  De Liz has done an incredible job capturing the spirit of Golden Age stories in a way that still feels fun contemporary and new. I am especially fond of her take on Wonder Woman’s supporting characters, Etta and the Holiday girls are a delight. De Liz nails the core tenants of Diana’s character; she is self-less, formidable, and curious, but she is also quite serious. I would like to see Diana have a bit more fun in a second season. Now that the first season of The Legend of Wonder Woman has come to an end, do yourself a favor and pick up the trade paperback.