In many ways the DC Rebirth issues can be tough to evaluate because many of them have spent a lot of time recapping things that familiar fans of the character already knows. This title certainly has its share of setting up the story and introducing you to character, but since we haven’t had a Blue Beetle title in some time we actually see this issue move forward at a fun pace.

The Blue Beetle that we get in this story comes in the form of Jaime Reyes, who has been the most recent incarnation of this character. Jaime has a scarab that is fused with his spine which allows him to transform into the title character. However, folks that know Blue Beetle as billionaire tech guru Ted Kord will not be disappointed.

Kord serves as partner and mentor to Jaime. The relationship of these two characters provides the backbone of this book. Kord is obsessed with the idea of super-heroism and enthusiastically drives Jaime to be the best superhero he can be. However, Jaime isn’t as enthusiastic and wants nothing more than for Kord to spend his energies figuring out a way to separate the scarab from Jaime’s spine. It’s fun and refreshing to see a main character take on this role, and in his heart of hearts wants nothing to do with this power and just wants to be a kid that goes to class and hangs out with his friends. The dynamic between this duo is rich and has all the opportunities to explored deeply as this book moves forward. 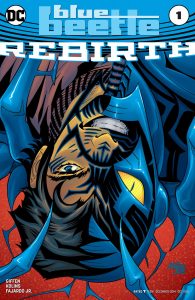 Fans of Blue Beetle will probably recognize Keith Giffen, as he has a long and rich history with this character. The pages of this book have a lot of love and care put into them. It looks forward while also paying homage to the past. This is not your typical, brooding, superhero. This superhero is more akin to Spider-Man, except with a stronger support system around him. The importance of family and friends plays heavily in this book, and Jaime happens to have friends that not only know that he is a superhero, but support him in ways that you hope friends will.

The art in this book is solid overall and pleasing to look at. It has a certain aesthetic that wouldn’t work for all books. However, considering the lighter tone that this book brings the art seems to match is very well. There are panels of Kord that make him look like he is the same age as Jaime (he should be much older) and that can be distracting. That is a minor quibble, though.

Check it out. This book may not be for everybody. However, it is a fun, light, change of pace book that provides the DCRebirth line with diversity in the tone of books they are offering. This actually has the opportunity to be one of the more heartfelt DC titles. I hope that it takes advantage of that. Also, did I mention Doctor Fate?