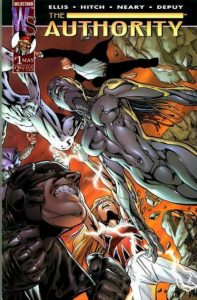 I was not a Warren Ellis fan. I had no idea really who Bryan Hitch was. I had read Wildstorm and knew them more for pretty art, pin-up worthy heroes, and for being very late. By 1999 superheroes were stale. I was on the cusp of getting out of comics, as I couldn’t stomach another Force Works or young Tony Stark in the armor because old Tony Stark was a traitor.

I was in college. There were girls, booze, parties, and of course classes. My LCS pull list was small, a handful of books at best. The thought had crossed my mind to end it but it was the longest nonfamily relationship I’d ever had. Like any bad relationship I wasn’t sure if I should get out of it or if I should just stick it out, put on a fake happy face just to forgo an awkward conversation that began with “It’s not you, it’s me” when we all knew it was them. Could I just pull the disappearing act? After a few months they’d stop pulling my books. I’d been in to long to be that big of a dick, plus one of my watering holes was across the street from my shop. I may have been willing to cut my ties with comics but I wasn’t going to give up my bar.

Then the Authority happened and comics felt different. Warren Ellis had been on the scene for a few years. I couldn’t say I was a fan, I still can’t say that, but the Authority was the book he was born to write in 1999 and Hitch was the perfect artist. They wanted to tell stories differently and luckily Wildstorm was there to let them.

Jim Lee had realized comics needed good writers as well as artists. He first turned to Alan Moore who re-crafted WildC.A.T’s into Wildcats and told excellent stories. Ellis found his way to Stormwatch and threw everything out and gave the book gravitas, political intrigue, mystery, betrayal, and over the top superhero action. But Stormwatch died and from the ashes came something groundbreaking, a book that was epic in scope and beautiful in appearance. Welcome to the Authority.

They were heroes. Just not the heroes we are used to. Jenny drinks. Jenny drank a lot but there is no need for an intervention, no multi-issue arc to deal with her drinking. Jenny drinks, she handles it. The Doctor does drugs. Does he have a problem? Under later writers yes, under Ellis the Doctor does drugs but so what. Apollo and Midnighter were a gay. No need for a foil embossed cover. No need to announce to the world media that you are progressive for having gay superheroes. Apollo and Midnighter are a gay couple. Deal with it.

These are not the white knights on high to protect us. They are persons of mass destruction, who have flaws, but who are gifted with awe inspiring powers and willing to go to great, hyper destructive and violent lengths for a finer world. These were characters like me. Flawed.

I loved the first year of the Authority. It is neither the greatest thing I have ever read nor the prettiest. Yet it was the perfect book for the time in my life. It is a book I come back to. When my love begins to wane I go back to Warren Ellis and Bryan Hitch’s widescreen super heroics and a smile comes to my face and I remember why I love comics. 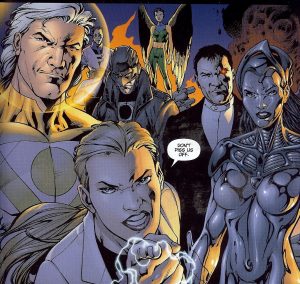