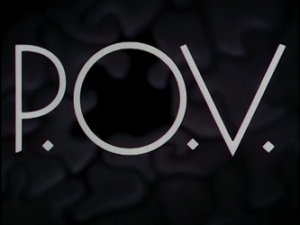 Synopsis: [from IMDB, see Link: Here] The day after a police sting to catch a drug lord goes disastrously wrong, the events of the night before are reconstructed by the accounts of three police officers: Harvey Bullock, Renee Montoya, and a rookie, named Wilkes.

When you ask fans of Batman: The Animated Series to explain why they hold the series in such high esteem, many will mention how the series’s mature themes and storytelling ushered in a revolutionary new era for animation. With the show, writers were able to push the boundaries of what was expected in a children’s television show, demonstrating that can still tell quality stories without ‘talking down’ to your intended audience. With this in mind, P.O.V. stands as one of the finest examples of this ethos. Like many other installments that would follow, this episode marks the first time that Batman’s writers neglected to follow standard superhero formulas, focusing on providing a story line that not only focused on a ‘non-costumed’ antagonist but also reduced Batman’s involvement into that of a supporting role.

Reminiscent of the Akira Kurosawa’s classic movie Rashomon, the story focuses specifically on three Gotham City police officers and their recollection of a failed drug raid. Between the three narratives, we are given a mosaic of a narrative, built from the perspectives of Montoya, Bullock and Wilkes.

Although there are three narratives that form the majority of the episode, the main protagonist of P.O.V. is clearly that of Officer Renee Montoya. Montoya is a character that was specifically introduced within the series and has since become a popular character in her own right, appearing in other Batman media.

Her narrative is the moralistic core of the episode and it is through her agency that the episode focuses on as she continues her investigation following her dismissal by the department. In what was a very brave move for the time, the episode focuses on the perspective of a Hispanic, female character, something very different from the largely white, male dominated leads that surrounded the Superhero genre. It’s a refreshing change and makes the episode all the more interesting by moving the perspective away from the superhero lead. Although she is saved by Batman during her own recollection of events, Montoya’s agency leads her to not only defeating the gangsters, but also saving Batman’s life.

Alongside Montoya’s narrative, we are also given further depth into Bullock’s own character. Rather than the one-dimensional, argumentative Batman-hater, we begin to see the more positive aspects of his character towards the end of the episode. Although he embellishes the truth of his narrative, Bullock begins to demonstrate the heart of gold that would become core to his shambly, unkempt image. Alongside Bullock, we are also provided with the narrative of a young rookie named Wilkes, whose view of Batman is that of a Supernatural monster- one who’s view seems inspired by Detective Loeb’s experiences in Frank Miller’s iconic Batman: Year One.

The idea of gaining insight into how normal people (such as Police Officers) survive within the carnivalesque world of Gotham City is something that has since become a popular convention for many writers to explore. In fact, the episode is very reminiscent of Ed Brubaker, Greg Rucka and Michael Lark’s popular comic Gotham Central, which dealt with the stories of Gotham’s beat cops, had Montoya as a central character and was the inspiration for Fox’s Gotham TV series.

As noted, within each of the narratives in P.O.V., Batman is relegated to a supporting role. In doing so, it adds another dimension to his position within the series. Instead of simply the lead protagonist, Batman appears as a mysterious urban myth, one whose appearance is that of a dark guardian angel who protects the officers from danger and even sacrifices his own well-being to do so. It’s an effective portrayal and really adds another aspect to how Batman is presented within the series.

Not only this, instead of the ‘villain’ of the week story lines of previous episodes, P.O.V. marks the first time a ‘non-costumed’ villain is marked as the lead antagonist. Never one to back down from mature issues (the episode also mentions police corruption), here, a gang of drug lords make up the main antagonists of episode.

In a genre formulated by the elemental struggles of gods and monsters, to have Batman and the police face off against normal street criminals, might at first seem somewhat reductive. However, what the writers realize about Batman is that his limitations as a ‘human’ superhero allow him to play off such noir inspired gangsters. With Batman, such villains seem both logical within the story world, but also present a tangible danger to his person. It’s also worth mentioning that one of the lead gangsters in the episode is voiced by Ron ‘Hellboy’ Pearlman, an actor who would later lend his voice to the tragic villain Clayface in the groundbreaking two-parter Feat of Clay.

P.O.V. doesn’t just succeed in its innovative storytelling, the animation is also an incredible step above several of the previous episodes. When Batman faces off against the gangster in the warehouse in Montoya’s memory of events, it is reminiscent of the brilliant Fleisher Superman cartoons. Here, alongside the fluid and dynamic animation, the lighting of the warehouse fire is used to incredible atmospheric effect, invoking danger and lighting he action scenes with dramatic menace. The episode also uses detailed single cell, aerosol sprayed images to add further emphasis on a face or expression. It’s an effect that beautifully executed and representative of the series when it’s at its best.

Ultimately, this episode succeeds because it demonstrates the maturity that would become integral aspects of the series. While it is not completely perfect, (i.e. the police investigator’s dialogue becomes incredibly tiresome), this episode marks a very strong installment in the series and a severe step up from last month’s The Underdwellers. This is an episode which offers a strong introduction to what the series will soon become defined by; beautiful, atmospheric animation, combined with non-conventional, mature storytelling and characterization.