The Few and Cursed #1 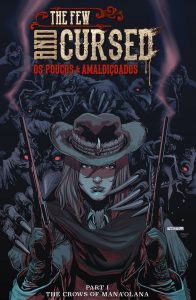 Imagine if you mixed Red Dead Redemption with Supernatural and set the story in a post-apocalyptic alternate 1910. That is probably the best way to describe The Few and Cursed #1 by Timberwolf Entertainment, the first of a six-part miniseries. We follow another nameless protagonist that either goes by “Red” or simply “The Redhead”. Red is one of a few remaining Curse Chasers, which basically seems to be a pretty kickass slayer of monsters and other nasty supernatural beings.

We find Red at the beginning of the story riding up to a lightly populated town that reminds you of any other typical small town in a Western in which John Wayne is going to face off some poor soul at high noon. She walks in the saloon, because of course, and some local goons roughing up a young lady. From here you find that there is a snake monster that terrorizes the town but they can keep it at bay by providing sacrifice. When Red learns of this, the hunt is on and the story then truly begins in full force.

This book tries to be many things in its attempt at taking certain tired tropes and turning them on their head. It mostly succeeds. There are moments that feel clunky but they are bailed out by the beautiful art by Fabiano Neves. The very first page is a wonderful scenic view that could easily be framed and mounted. The art is clean and the style fits the story and belongs in the best possible way. The colors by Dinei Ribeiro & Ivan Nunes make the art pop off of the screen, and viewing on an HD tablet enhances the experience.

Felipe Cagno starts this series off on a strong foot. If it feels clunky at times it is because it is the first issue and the reader is simultaneously trying to figure out where the story is going and what the story is supposed to be at the same time. Now that the true story is set up and in motion this story has an excellent opportunity to take off in issue two. Cagno definitely does not want The Few and Cursed to feel exactly like something else you have read before. There are just times where it feels like maybe he tried too hard.

Verdict: Check it out. Despite how many genres The Few and Cursed is trying to be, it is a Western first. If you don’t like the idea of a classic foul-mouthed Western combined with post-apocalyptic supernatural elements, then this isn’t for you. It is beautifully rendered and never dull, and at $2.99 for a six issue miniseries it is not a huge investment, but might read better as a collected edition.

Check it out on comixology here!!!