All of this will crumble 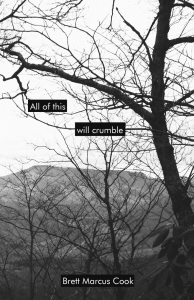 There aren’t many stories that take you on a journey alongside a main character and you never learn his/her name. There aren’t many comics that use a photograph as a cover or leave their panels black and white. You get both in All of this will crumble, as you follow an un-named protagonist as he goes on a hike through the wilderness in order to get a good viewpoint of a monster that has destroyed the vast majority of the world.

The writing in the book isn’t going to blow you away. The art has its moments but is definitely simplistic. There are more than a few weird moments that make you raise your eyebrows. Despite that, this is a story that is likely to stick with a person long after it is read. You get to go on a journey with an everyday person that clearly has regrets about how he has lived his life. He’s a person that probably has a tendency to give up, but is very determined to forge a certain path even as that path leads towards certain peril.

Cook is also very clever in how he provides the narration from the protagonist. The font of the lettering itself is portrayed as if he is printing it. Then the thoughts themselves would have words or phrases crossed out with other thoughts following, much like you would see in a blog when someone is trying to be clever. In this instance it comes off as an effective portrayal of someone having an initial thought and quickly shoving it back and replacing it with something more proper. It was these moments, as much as any other, that helps the reader understand this un-named character that much more.

This is the type of story that has a quality not unlike Stephen King’s The Mist. Throw in a mix of Cloverfield and Pacific Rim in there as well. Readers will leave the story not knowing if they liked it, and long after perhaps even deciding they didn’t. But it is the type of story not many would forget due to it having a particular sense of charm and heart to it.

Verdict: Buy it. It’s $1.99 on Comixology. It’s also a one shot, so there are no worries about adding it to an ongoing pull list. It may not be everyone’s cup of tea, but it is a story that won’t be easy to forget.