Story and Art by Rihito Takarai

I personally have very limited experience with the boys’ love and yaoi side of manga and anime. It’s always fascinated me, especially because of how much material is available for those who enjoy the genre. From a comic book fan’s perspective, you don’t see the volume of gay relationships in comics like you do in manga.

My first foray into boys’ love (BL) was Loveless, which can be problematic: college man hanging around and flirting with a middle school boy…yeah, not my cup of tea. That type of relationship isn’t characteristic of BL only; remember, Mamoru dated Usagi when he was a freshman in college and she was in middle school. But, like hetero stories, the BL genre can tell all sorts of romantic stories featuring two male leads. 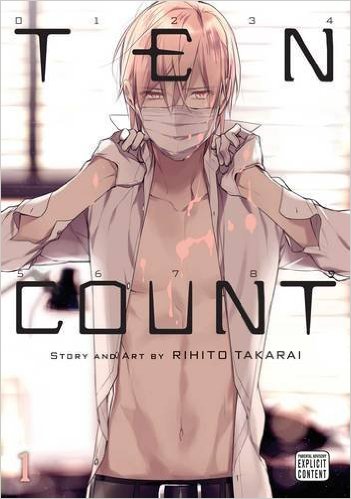 Ten Count by Rihito Takarai captured my heart by presenting a main character with OCD. Shirotani is a corporate secretary who suffers from obsessive-compulsive disorder. His main obsession is with germs and their presence everywhere. His compulsions include frequent hand-washing, cleaning, and avoidance. Shirotani’s OCD is presented as a legitimate concern in that it impedes in his everyday life. His hands are so raw from washing that he has to wear gloves, and he has to then wear a suit so his gloves don’t stand out. As a child, he chose to go to schools within walking distance to avoid the subways. The things people without an anxiety disorder do everyday are just a dream for Shirotani.

Until he meets Kurose.

Kurose comes into Shirotani’s life because of an accident where Shirotani could not bring himself to act. Kurose is a psychotherapist, and his clientele is primarily children. But, when he sees the blood from Shirotani’s raw hands seep through his gloves, he finds himself reaching out to help Shirotani.

The story is told primarily through Shirotani’s point of view. Kurose’s presence is mostly limited to when Shirotani sees him, so readers start to see Kurose through the eyes of Shirotani. Our exposure to Shirotani is limited to the manifestations of his OCD and his thoughts regarding Kurose, so any deep dives into his psyche is not thrust upon us immediately. There are few glimpses of his childhood presented without comment, which will certainly be important as Shirotani works through his OCD.

Takarai’s artwork is downright beautiful in this volume. The setting is present-day Japan, but she somehow manages to bring the backgrounds to life. Kurose’s clinic, the bookstore, the cafes…all are rendered with detail not always explicit in romance and drama manga. Of course, there are the traditional close-up reaction shots with a white or black background. Her characters are drawn fairly stoic, forcing the reader to pay close attention to subtle movements correlating with comments or thoughts. There is one panel with a dramatic overreaction that I would expect from a different type of manga, and it seemed out of place. The subtly works for this type of story, which is proving to be a slow burn worth reading.

Buy! If you have any interest in stories with a psychological/therapeutic bend in them, this is the book for you. There is one thing that has me somewhat concerned. Kurose is not Shirotani’s therapist by any means; he meets and talks with Shirotani on his days off from the clinic. Even so, psychologists (and therapists) ethically should not be in a relationship, be it family, love, or friendship, with their clients. Again, Shirotani is not a client, but their relationship is built on that type of interaction. Kurose presented himself to Shirotani as a therapist first rather than a friend (potential lover). This approach really complicates things for the men, which I’m sure is the intention story-wise. Regardless of that particular element, I fell in love with this story, and I am rooting for Shirotani to get to a place where he feels comfortable with himself.