Survivor’s guilt is a hell of a thing. It comes marching into your heart with a white flag held high and a silver tongue to whisper the worst into your quivering heart. In most cases, the sacrifice doesn’t matter. Time passes, and even after the shock seems to have wreaked the worst of its havoc, it’s still there. You tell yourself, and others, that you’ve moved on … but you can’t. What if because you lived, no one else had to die that day? Would that help? Probably not. 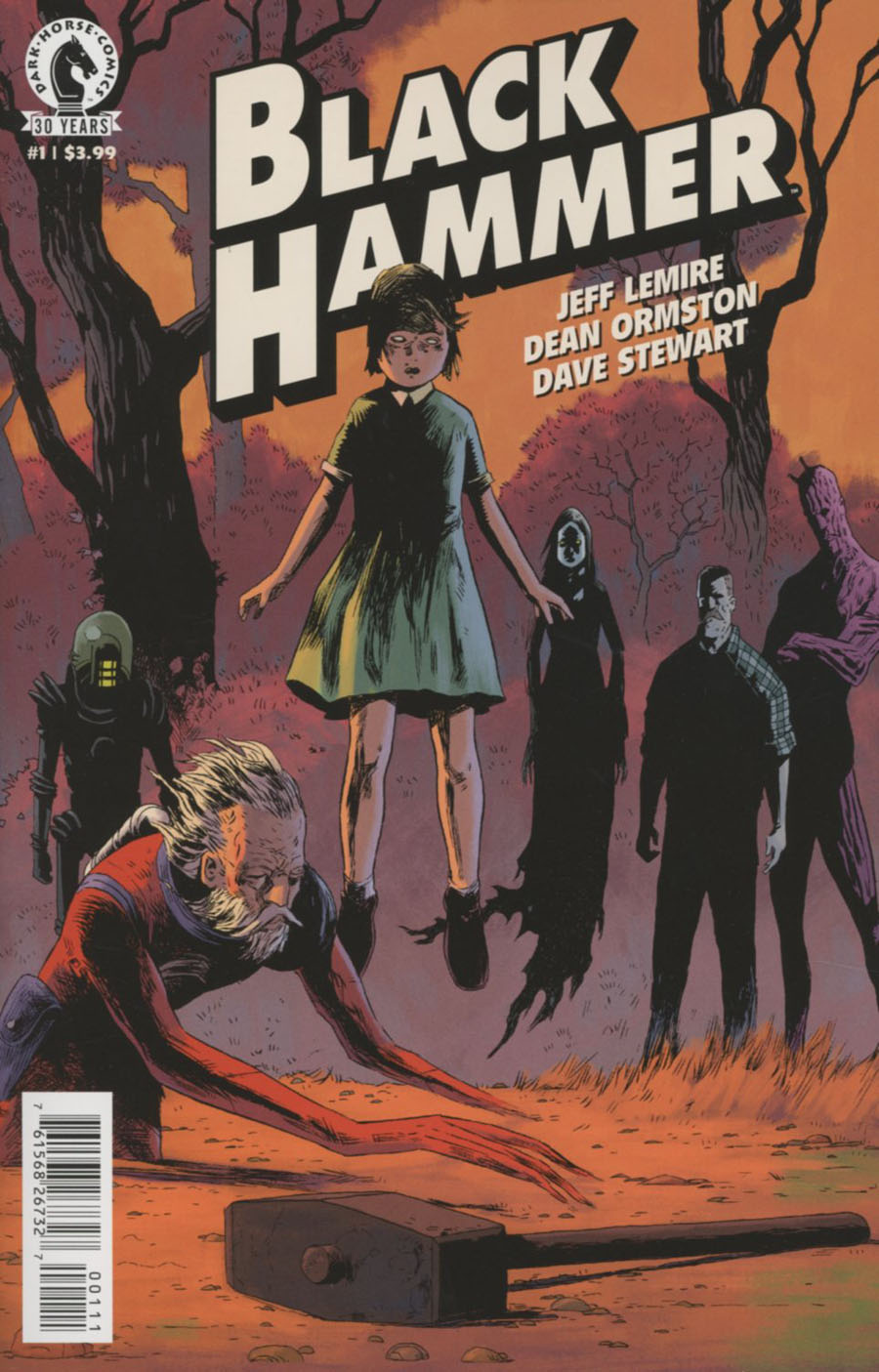 Meet Abraham Slam, Col. Weird, Talky-Walky, Barbalien, Golden Gail, and Madame Dragonfly – the super powered survivors-in-hiding after ultimately losing the battle of Spiral City. 10 years have passed since the group had  made a pact to disappear from the public eye, and live out the rest of their days, atop a plot of farmland in the middle of nowhere, USA. The thing about seclusion is, after a while, the desire to leave becomes all that one can think about. So what do you do? Do you stay, and honor a decade-old agreement meant to keep you and your friends safe? Or, do you make a plan to venture beyond the confines of your incarceration and strike out on your own? It’s a tough call to be sure, and one that Abraham and his friends will have to ponder as the memory of their departed comrade, Black Hammer, looms above their weighted consciences.

For me personally, I enjoy Jeff Lemire’s writing the most when I feel as if the gloves are off and the man can get as weird and emotional as he likes. Suffice it to say that Black Hammer #1 exudes both of those qualities, as well as a few more when turning the pages of this dark and pulpy bit of fiction. I felt an immediate sadness while reading this book. Oh, not for me, but for the heroes who’ve chosen to hide away – feeling as if the world no longer needs heroes. Honestly, I can’t think of anything we need more in today’s day an age. I dig that there’s a fair bit of mystery surrounding the events of that fateful day in Spiral City. I’m down with the concept of the general public moving on with their busy lives as the heroes are left to mull over the loss and consequences of their actions. It’s not that I enjoy seeing heroes in pain, not at all. It’s that I relish having a book on the stands that appears to be taking a hard look what it’s like for heroes to suffer after the smoke has cleared.

Another highlight for me, was the striking artwork of both Dean Ormston and Dave Stewart. As you turn the page, thick black inks cast shadows across the faces of our reclusive crew, while thin lines serve to accentuate every wrinkle and stress line that glows under a golden sun. For some reason, I imagine the combined talents of this team standing at the nexus of a crossroad – waiting for the devil to come and bless their pens and pages.

What if you weren’t ready to retire from a life of power, adoration, and purpose?

What if your sense of loss and commitment started to fade?

Where would you go? Who would you be? Can you ever truly walk away from being a hero?

VERDICT: Buy it. Black Hammer #1 has the makings of an emotional and mysterious story for anyone who loves reading super hero comics with a twist. I want to know more about these characters, and will most definitely be adding this title to my own personal pull list.

This review was written while listening to the album Salom by the band Marriages.