This time round we will be looking at a book considered by many (including my LCS) to be a classic: ‘The League of Extraordinary Gentlemen’. 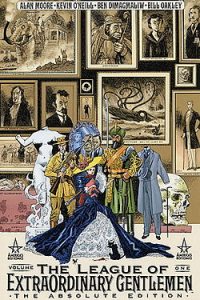 Ironically published by America’s Best Comics, there are a number of collections within ‘The League of Extraordinary Gentlemen’ series, but for now I will be focusing on the original series.  Whilst there is also a film of the same name, which I was memorably taken to see on a date by a floppy haired young gentleman named Jonty way back when in 2003 (don’t worry, this isn’t about to turn into a travelogue of my disastrous early dating history, let’s just say that the date was about as good as mainstream audiences found the movie and leave it at that…), we are going to keep our eyes firmly on the prize of the comic book.

Set in a sort of Victorian Era London, we are gradually introduced to our cast of lead characters, who any student of English Literature will (or at the very least should!) recognise:  Allan Quartermain, Captain Nemo, Hawley Griffin, Dr Henry Jekyll (and Mr Edward Hyde of course) and the youthful Mina Murray, nee Harker, nee Murray. Now those of you who have, like me, seen the film will notice that there are some glaring omissions from this list: Skinner, Tom Sawyer and Dorian Gray. Now I am in no way inclined to go in to the whys and wherefores of the arguments behind adding an American character in to keep a US audience sweet (we all know that our British accents are scary and perplexing), or why Griffin had to become Skinner (*cough* copyright issues *cough*), but I shall simply say that the book doesn’t lose anything without them, much as I love Dorian Gray as a literary character. I do have hark for the character of Mina as portrayed in the film, as she has a little bit of je ne sais quoi (actually, I do know what, but I’m not going to spoil a 13 year old film!) that is missing from her portrayal in the book. This rag-tag group of “volunteers” find themselves thrust into the defence of the realm, with some gung-ho British intelligence to back them up and a mystery benefactor funding their missions. 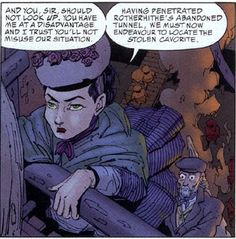 Now, being an Alan Moore book, this does of course have some highly problematic areas; the character of Mina for example. As the leader of the ‘menagerie’ she should have the most agency, the most chutzpah, quite frankly the most balls – but does she? Heck no!  She is patronised by Quartermain, drooled over by Griffin, begs for the nearest man to hold her when she seems to be in mortal peril, and is generally a bit of a damp squib. I still like her though, she’s feisty despite her faults, and keeps the men in check. But she’s still a classic Alan Moore female; hint of backbone but crumbles into the arms of the nearest man given half the chance, and often used to push the plot along. Plus of course we have the – somewhat obligatory – (attempted) rape scene, because it wouldn’t be a Moore book without that now would it…? 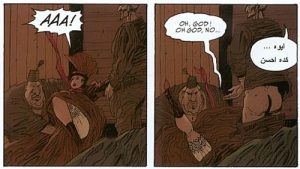 Another aspect of the book that probably would have troubled me if I didn’t see the amusement of it was the framing device used by Moore  to create a sort of “Boys’ Own” type setting, suggesting that us poor frail ladies might not be able to cope with the thrills, spills and derring-do encountered within the pages.  Set alongside the missed opportunities of Mina, it has the potential to be troublesome, but if you read the book (as I do) with a healthy pinch of salt – or should that be dose of smelling salts? – then it serves it purpose well. Plus it gives all you healthy man-types a great sense of what you are missing out on in this emancipated day and age of strong women and androgynous literature!

So, to the art. Kevin O’Neill is on duty here, with a highly stylised woodcut approach. It has a touch of realism, although I would have preferred not to have the stereotypes of Moore’s narrative emphasised quite so much in the art, especially when it comes to the “Devil Doctor” of Limehouse and his cohorts. In general all of the characters’ faces are elongated, often inhuman looking (which seems rather apt, given the context!), although they swim in to life thanks to the colours of Benedict Dimagmaliw. The pallet is often subdued. even muted, but with real bursts of colour – especially when Mr Hyde is doing his thing for want of a better expression. O’Neill’s ability to draw an invisible character is outstanding, ludicrous as that sounds, although I must say his continuity of faces leaves a little something to be desired. For me it is the backgrounds and crowd scenes that really show off O’Neill and Dimagmaliw’s skills. I’m not going to ruin the narrative, but the final page in this collection shows the style and colour off to a tee, and it’s worth picking the book up for that single page spread alone, in my humble opinion!

All in all, I like this comic (and not just because one of the owners of my LCS might ban me if I don’t say that!), despite its flaws it has a great premise, and follows through with the threads that are put down from the very first issue. Which is good, because I already have the next two installments of the series lined up on my bookshelf, and if you are all really lucky I might just tell you about them soon…