She wants to marry a rich man when she grows up. He wants to clean facilities and eliminate the negative energy that exists in the world. Match made in heaven. 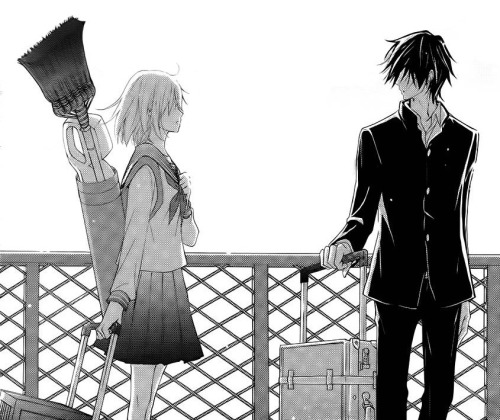 Kyousuke Motomi’s QQ Sweeper can best be described as a comedy-romance-horror, though that description does not do it justice. Fumi Nishioka is a high school girl who is searching for her Prince Charming – provided he has a nice bank account. It’s not just because she’s shallow; Fumi’s guardians abandoned her, and she has very few resources to support herself. Kyutaro Horikita is on the school’s beautification committee, and he is constantly cleaning. His classmates only know that he likes to clean, often thinking him strange for his obsession.

Little does anyone know what would happen if he did not vigilantly clean.

When people have evil in their hearts, they become infested. In QQ Sweeper, these infestations are manifested through spooky bugs that whisper things like, “Just die” and “No one likes you.” The infestation spreads and grows. It feeds off the bad thoughts people have, eating away at the mind. Without the attention of a cleaner, the person succumbs to the bugs.

In a fateful encounter, Fumi demonstrates an innate aptitude for cleaning/punching bugs. Kyutaro’s family sees potential in her, and thus her life as a cleaner begins.

The premise is certainly strange, but it offers a unique perspective on how negative thoughts impact our lives. The beauty of fiction is that it can stretch and transform real life phenomena into something that readers can easily break down, interpret, and rebuild into our daily lives. The bugs are particularly interesting. They only appear in the minds of those who harbor negative thoughts. These negative thoughts can be self-directed or other-directed. Either way, they create a poisonous ground for these creatures to move into. Their occupation ends with death and harm. In QQ Sweeper, the cleaner’s job is to make sure the bugs cannot create a fertile environment. What they do can be called preventive care.

In the medical field, we are all aware of things we do to reduce the likelihood of disease. Drink enough water, exercise, maintain a healthy weight, get our shots…These are all actions that are beneficial in the long run. People need to make sure they are taking steps to reduce mental stress as well. When I was in graduate school, my classmates and I would joke about self-care, or the time we took away from studies to do something fun (in my case, it was read comics and play Mortal Kombat). As frivolous as these activities seem, they were a way to decompress from stress and inject some positivity into our hectic lives. With Kyutaro’s help, Fumi learns to harness happy thoughts and good feelings to banish the negativity that surrounds people. By cleaning environments, Kyutaro and Fumi are trying to encourage healthier living and reduce the chances of an infestation occurring. 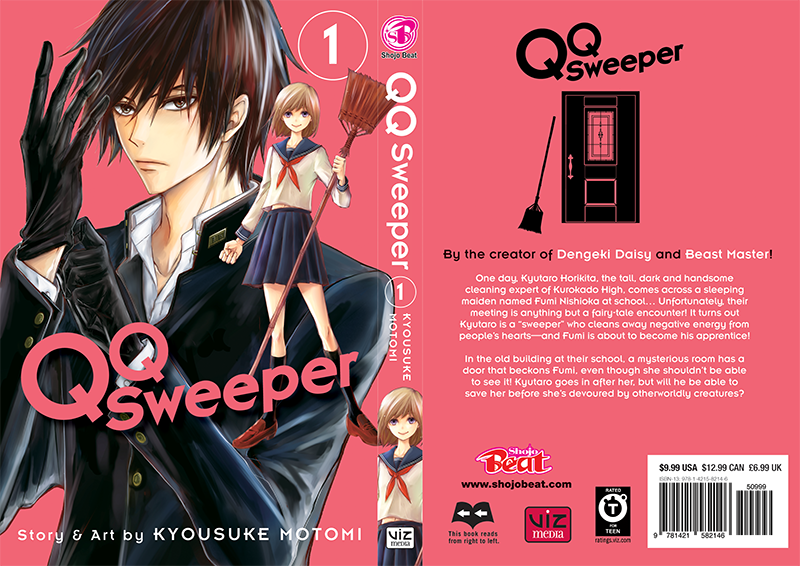 QQ Sweeper recently concluded with volume 3. All three volumes are published in North America by VIZ Media’s imprint, Shojo Beat. Though this series has ended, Kyousuke Motomi writes that the series will continue under a new title, Queen’s Quality. The first volume of the new title has been published in Japan, and there is no date set for an English release. On their tumblr, Shojo Beat remarks that they hope to acquire the license for the new series.