Story and Art by Karino Takatsu 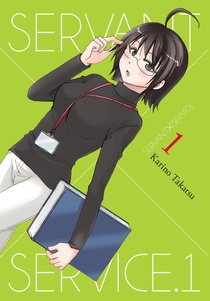 New jobs can be stressful. You have to learn the layout of the office, the expectations, the co-workers, and the clientele. The only way to endure the stress is to poke fun at it, let it know that you can manage through the crippling doubt of a new job. Karino Takatsu has taken the setting of a civil service office to lighten the mood around office jobs, particularly those that are a public service and demanding.

What sets the tone immediately for the book is the cast of characters. Each of the main characters is in their early 20s, straddling the line between adolescence and adulthood. Lucy Yamagami (pictured on the cover of the volume) is an ideal civil servant, embodying professionalism and efficiency in her job. Her inspiration for civil service is less than ideal; when born, she was given numerous names by her parents. Unwilling to settle on one name, they wrote down every name suggested on the birth form, leaving Lucy with a lengthy name that goes on and on…and on. She becomes a civil servant to stop this tragedy from happening to any other baby, believing that her own suffering could have ended had a civil servant been paying attention to the birth record. Yutaka Hasebe is far more relaxed than Lucy. Hasebe is a slacker and a charmer with odd skills under his belt, like sign language and ventriloquism. He’s always on the lookout for an opportunity escape work and harass his female co-workers, who are onto his game and team up against him whenever possible. Saya Miyoshi is a soft-spoken, beautiful woman who attracts old ladies everyday at work. They talk to her and complain about their families to the point where Miyoshi cannot get her work done. Her solution? Hide under her desk and avoid eye contact with old ladies. Rounding out the new hires is the temp, Megumi Chihaya, who refuses to become a real civil servant because the demand on her time would cut into her cosplay activities.

Servant X Service reads as a quippy comedy, choosing to deliver the story in steady 4-panel layouts. The set up is presented and delivered in half a page, and each set of four panels is given a title. There are overarching story elements, such as the bossiness of a co-worker’s sister, Chihaya’s quest to get the measurements of Lucy, and Hasebe’s recurrent slacking. Though it does not read like most manga you are familiar with, the format is reminiscent of comic strip collections.

The art of Servant X Service is simple and straightforward, relying on facial reactions to drive the comedy. For example, Lucy has an “antenna” that sticks straight up comically, and her co-workers constantly point it out. Another character develops a permanent popped-out vein, to which other characters interpret a constant state of anger. The panel shots are straightforward, forsaking complex backgrounds, flowery overlays, and dynamic poses. The result is a focus on the comedy and monotony of office life.

Servant X Service is available from Yen Press. Other volumes from this series will be released in print this year!