When superheroes hit the scene in the late 30s, they represented a group of people who felt like outsiders. The creation of these heroes was a way to highlight the struggles the real people faced while living out a dream. The same can be said of the company Milestone Media, creators of Milestone Comics. Through Milestone, numerous characters in a standalone superhero universe reflected the struggles of a minority group who felt like outsiders in the comics industry. These Black creators wanted characters who felt like them and handled the problems that often face the Black community. One character that stands out from these heroes is Icon. 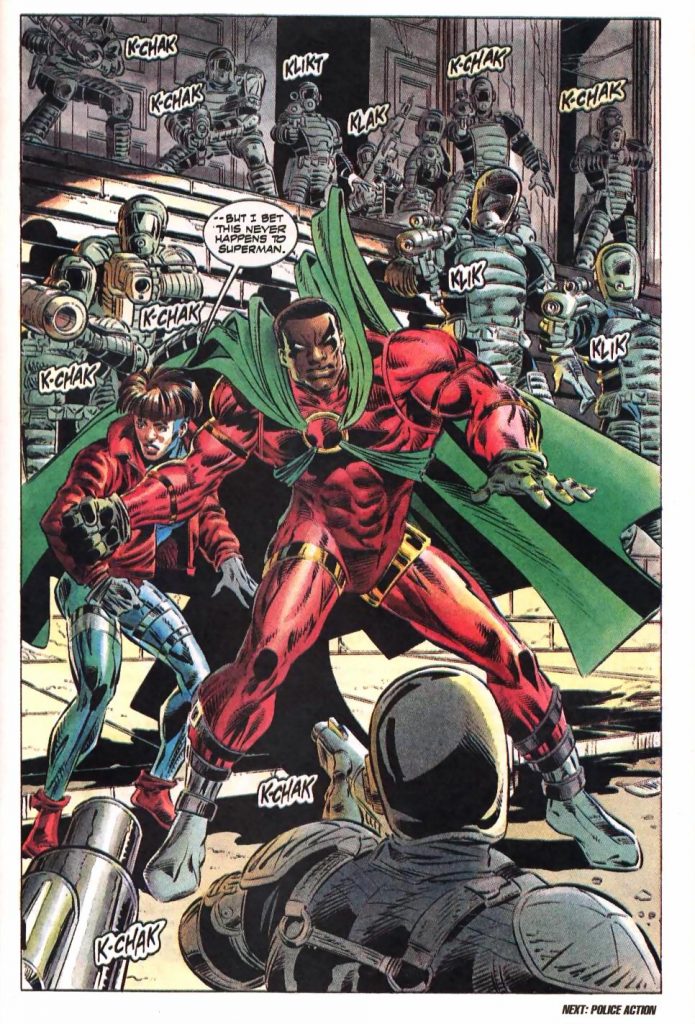 Icon was created by Dwayne McDuffie and MD Bright and helped launch Milestone Comics. As a Black conservative lawyer with substantial influence in his world, Augustus Freeman IV represented a different view from his own creators. Like superhero predecessors, Freeman is a literal outsider, an alien stranded on Earth. Through happenstance of crash site, Freeman lives his early life as a slave in the Deep South. Freeman lives through the major events in Black history, from the Civil War to Jim Crow Laws to Harlem Renaissance to the Civil Rights Movement. All this time, Freeman has kept his outstanding abilities secret, for no particular reason.

However, Icon is nothing without Rocket. Raquel Ervin comes from a family of generational poverty, the only daughter of a single mother with multiple jobs. When she witnesses Freeman unharmed after being shot and flying, she hunts him down and convinces him to become a hero for the city of Dakota. Further, she sees her future through him; namely, Raquel believes her future lies in becoming a hero. Freeman fulfills her dream by providing a way for her to become a hero in her own right and fight along his side.

Icon deal with issues of generational poverty, race relations, blaxploitation, afrocentrism, conservative and liberal thinking, and the meaning of being an icon for others. The events in the series are heavy; Raquel, in particular, deals with common problems that significantly change lives. More importantly, the creative team behind Icon recognize just how important these real-world concerns are and present them with care and respect.

Unfortunately, Icon and Milestone Comics ended soon, partly due to the decrease in sales of comics industry-wide. Even more unfortunate is the difficulty in reading Icon. There are two collections of the series, and they do not collect all 42 issues of the series. Comixology does not carry digital editions of the series. After reading the issues presented in the two trades, it is hard to imagine why there is such a barrier to reading Icon. Even if you have not read Icon or cannot get ahold of copies, it will be worth your time to listen to what makes this series so special on episode 12 of Legendary Runs.

You can listen to our episode on Mark Waid and Mike Wieringo’s Fantastic Four here and also on iTunes. If you have any questions or comments, please reach out to us at: