ETERNAL CON 2016
A quick look back by Bob Reyer

I had been hearing some very good things about the now 4-year-old Eternal Con, and with the demise of I-Con, the convention that ran each Spring at SUNY: Stony Brook for over 30 years, Long Island was in great need of something other than the smaller hotel-based expos that while fun, were never quite able to fill the void left by the loss of the larger show.

Let me say that based on this past Sunday, Eternal Con more than measured up in terms of a convention experience, featuring some interesting media guests in addition to those from the four-color world, a great slate of vendors,  a stunning setting, and most importantly, a welcoming-to-all-ages-and-genders atmosphere that reminded me of the best of the old-time comics conventions.

First off, the Eternal Con is held at the Cradle of Aviation Museum , whose exhibits remain open during the show, 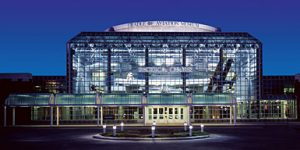 so in essence, you get a free pass to explore the storied history of flight on Long Island that runs from Charles Lindbergh through to the Lunar Module and the F-14A that were built at Grumman just down the road in Bethpage. (While wandering through the exhibits, I was struck by what a great place this would be for a Carol Corps event!)

The demographics of the crowd in attendance were a lovely post-modern mix, with what I would say was a 50/50 split between women and men, and tons of families in all configurations and combinations. They also represented many elements of genre fandom, and with vendors and exhibitors aware of this from previous years, there were booths with great merchandise that covered all those bases (with a solid focus on comics and related merchandise), as well as “recruiting stations” for the 501st Legion, the U.S.S. Britannic, and the Browncoats of NYC, among many others. (Every vendor that I spoke to was quite happy about both the turn-out and the interest level of their customers!)

There were lots of cos-players wandering about of course, but since I don’t own a cell-phone, you’ll have to take my word for how amazing some of these folks were, particularly a 3-year-old girl as The Wasp, a perfect Golden Age Flash, a Prince Robot IV from Saga, but what was most fun was seeing how many people were “casually cos-playing”, as each member of a family or group of friends had something going on, which helped lead to the joyful attitude of seemingly everyone in attendance.

There were some great guests, too; from the media side there were Brent Spiner from ST:NG, Chase Masterson from ST:DS9, Elizabeth Henstridge (Gemma Simmons from “S.H.I.E.L.D.), and”Sailor Moon” & “Power Rangers” reunions, with their biggest comics guest (in more ways than one–he’s about 6″6″”!) being Jim Shooter, who was mobbed the whole day, so I couldn’t get a chance to speak to him for our show–rats!

However, I did get to chat with the charming Kristen Gudsnuk,

who writes and draws the wonderfully-witty Henchgirl that you’ve heard me speak about. She signed my #1 (plus another for a friend) , and told me that, just like Nigel Tufnel’s amp, Henchgirl will go to #11, and that “things will get really crazy!”

I also had a chance to visit with Brandon Montclare, who said that big events could be in store for Lunella Lafayette in up-coming issues of Moon Girl & Devil Dinosaur (which will run through at least #18, so don’t believe the rumours about this book’s cancellation!), and that Amy Reeder is hard at work illustrating three new issues of Rocket Girl that could be out be year’s end.

My last stop of the day was Joe Kelly, the writer of Talking Comics favorite I Kill Giants, and it was great to hear that pre-production on the live-action adaptation is continuing, with Zoe Saldana still attached to the project, and Madison Wolfe,  one of the leads from the #1 film in America, “The Conjuring 2”, in line to play Barbara Thorson.

It was a genuine pleasure attending Eternal Con, as it brought back fond memories of shows of the past, but with the lovely mix of fans of all ages, it’s a show for the future, too, making Sunday one of the most pleasant afternoons I’ve had in a long time. My thanks and appreciation go out to Frank Patz and his staff for a job very well done!

VERDICT: Go! Go! Go! If you’re in the New York Metro area during the next Eternal Con, do yourself  a favor and take the plunge–I’ll guarantee that you’ll have a great time!  rrr