Kimberly’s back in pink. 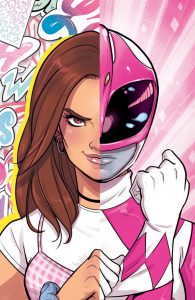 In the first issue of the Pink Ranger miniseries, after winning several medals for gymnastics in the Pan Global Games, Kimberly Hart investigates the disappearance of her family (who did not show up for her competition) in France only to find herself in the middle of a plot by the forces of evil. Oh, and this is after she’s retired from being a Power Ranger. And the other Power Rangers are off world and completely out of touch. Thankfully, she still has allies, and a lot more power than she realized.

Fletcher and Thompson, while keeping with the same updated timeline as the new Boom series (Kim’s mom has a smartphone, so it’s not 1995), have gone rather deep into the specifics of the actual show. They’re dealing with some plotholes and engaging with the mythology of the show, so I’m going to provide a little background information. You’d still be able to follow the story without these details, but there are plenty of easter eggs for those who are familiar with the original series.

In season 3 of Mighty Morphin Power Rangers, Pink Ranger Kimberly left the show. Rather than the unceremonious gone-off-screen treatments other characters usually got, Kimberly had a full story arc for her departure. She becomes the main target of the forces of evil as she has to endure her power coin being stolen by the evil Katherine (a girl under Rita Repulsa’s evil spell), being kidnapped and drained of energy by said forces of evil, and finally being driven to exhaustion and hospitalized from a head wound after falling off a balance beam. In the meantime, her mother has married a French artist and moved to Paris, and Kimberly has gotten an offer from a famous gymnastics coach to train for the Pan Global Games (the MMPR universe’s version of the Olympics). After regaining her powers, she decides to pursue her passion for gymnastics and gives her power coin to the newly-reformed Katherine. Zordon mentions that she would be able to resume her powers at any time. Unfortunately for the fans, the next we hear from Kimberly is in season 4, when she sends a “Dear John” letter to Tommy (paving the way for a romance between Tommy and Katherine that never went anywhere). She shows up for the film Turbo: A Power Rangers Movie as a hostage for the film’s villain, and then that’s the last we hear from her.

This miniseries redeems those lost opportunities and takes Zordon up on that offer to reinstate Kimberly as a Power Ranger. Fletcher and Thompson nail Kimberly’s later characterization. She’s no longer the shallow mallrat of the early episodes, but a battle-hardened veteran Ranger who is already regretting leaving those powers behind. Kimberly creates her own Pink Ranger outfit with biker gear and modified armor, a costume reminiscent of Burnside Batgirl and the Spider-Woman redesign (and there’s a further costume redesign that you’ll have to read to see). Deprived of her teammates and family, Kimberly seems alone, and yet she is more than ready to take on the bad guys (who I won’t reveal) alone if necessary. The Power Rangers have always been about teamwork and helping each other, but this story is about what happens when you’re all alone and have to keep going.

The art and colors for this issue are really beautiful. Daniele di Nicuolo especially draws the motorcycle and fight scenes as slick and dynamic. Sarah Stern on colors, though is what really sets this book apart and gives it a different look from the main MMPR title. Stern uses different shades of pink and complementary colors to shade the backgrounds and set an almost cyberpunk vibe to this comic. My only problem is that in a few of the larger panels the perspective feels off. The panel where the main villains are revealed is particularly confusing.

Kimberly is often a character who gets framed either as a damsel (and she does get kidnapped several times, but just about as many times as the others) or as a romantic/sexualized character (she had the romance with Tommy, but she also apparently served as the childhood crush for many fans). Yet Kimberly was neither damsel nor sex figure in the show itself, and Fletcher and Thompson completely understand that. I’m pumped to read this miniseries. I really hope this means that Boom will put out miniseries for other Rangers (like Trini or Zack) who were lost opportunities and still have potential.