I am going to kick things off here with the book that inspired this entire venture, and one that I consider to be about as British as it gets: ‘Batman Presents: Knight & Squire’. 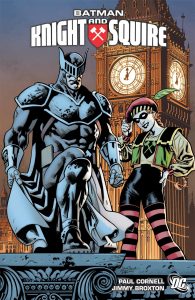 The Knight & Squire mini-series that I will be looking at was created by Paul Cornell; British writer on comics titles such as Dr Who and The Damned Band, and Jimmy Broxton; best known for his artwork on The Unwritten. When the original Knight character appeared in the early 1950s, created by Bill Finger and Dick Sprang in Batman #62, he was Percy Sheldrake, a titled member of the landed gentry. He was also a British vigilante who modelled himself on Batman (of course), and also on the knights of King Arthurs Court, hence his chosen superhero identity. Sadly (for him at least) this Knight was murdered, and his son Cyril took on the mantle after a period of alcoholism, gambling and general debauchery. Which actually sounds rather fun! Apart from having your vigilante father murdered that is. But I digress…

It is the second Knight, Cyril Sheldrake, that concerns us. Taken under the wing of a local girl, Beryl (with a sneaky nod to the Beano for those sharp eyed readers out there), Cornell and Broxton give us a Knight who is quick witted, good with his fists and rides a stylised motorbike that is modelled on a horse but is named after Dan Dare’s spaceship.  Still with me…?

The six issues that are collected together in a 2011 trade from DC are subtitled ‘In For Six’, a cricket reference from Paul Cornell, a man somewhat famed on the American convention circuit for his ability to baffle Americans with his attempts to teach them why the thwack of leather on willow is such a wonderful sound. My apologies to anyone that doesn’t comprehend that last sentence but trust me on this one, find Mr Cornell at a convention and ask him what I’m talking about. You can thank me later.

We are quickly introduced to a number of characters who should be recognisable to all DC (and Marvel) readers, but with a very English twist. We have Jarvis Poker (the British Joker), a not-at-all-like-The-Punisher character called Faceoff and with a reference to the fact that Superman could pop over (but never does), it is clear that this is a Britain that exists in the same universe as characters better known to American comic readers. 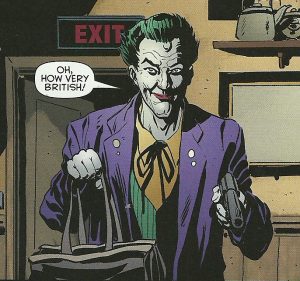 Each of the issues in this collection gives us an insight in to the platonic relationship between Cyril and Beryl, and obvious mirror to the relationship between Bruce and Dick / Damian/ Jason / why are there so many Robin’s / etc. and the effect that Beryl entering into a new (not so platonic) relationship has on it. Oh, and did I mentioned that Beryl has the ability to read minds? Because she does.

The collection itself is split into three two-part stories, the first two having very British themes and villains (Morris Men and an evil reincarnated Monarch anyone?), but the third takes a more sombre turn, hanging a Damoclean Sword of a terminal cancer diagnosis over one of the main characters (I’ll not spoil it for you but get those hankies at the ready!) and seeing this used and abused by another famous face. If I’m sounding cryptic, that because I’m trying to be. 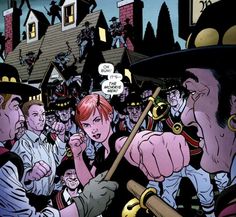 So, is ‘Knight & Squire’ actually good enough to tempt you? Of course it is! I wouldn’t be writing about it otherwise! British readers can appreciate the Carry On humour and oh so British references (Morris dancing, anyone?) whilst our American cousins can marvel at how weird all us Brits are, try to work out why ‘Two Ton Ted from Teddington’ would be a suitable villains name, and flip back and forth between the comic and the back matter presented at the end of each issue with it’s helpful dictionary of British terms and lengthy Who’s Who. Personally speaking I adore this comic, and would love to see more people picking it up and showing it some love.