Future Quest #1 is the first release of DC’s new line of Hanna-Barbera comics, and it sets the bar pretty high for the series of books that will follow it. In a market where there seems to be an over-saturation of licensed books, this issue demonstrates the potential for its title to rise above the rest. This is due to the skill and reverence of Jeff Parker and Evan “Doc” Shaner, the creative team attached.

The issue begins with a five page prologue that presents the origin of Space Ghost. Automatically Shaner and Parker establish that they will be approaching the character without any irony or satire. Even though shows like Space Ghost: Coast to Coast and Harvey Birdman: Attorney at Law were terrific, I feel that the creator’s made a smart move going for their initial more serious presentation. In the past with comics like Batman 66 and X-Men: First Class, Parker had demonstrated that he can take characters that previously had a certain flamboyance and write them with a level of earnest that doesn’t diminish their charm. He does that here with the visual aide of Shaner, who is able to capture the drama and excitement of the prologue and naturally transition into the introduction of Birdman and Johnny Quest complete with the fun and style of the cartoon shorts from the sixties. 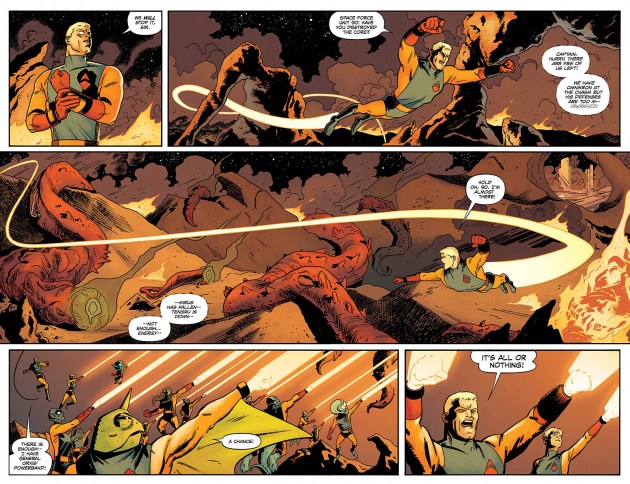 The majority of the comic follows the cast of Johnny Quest as they explore the appearances of abnormal vortexes in the Florida everglades. Foil to Dr. Benton Quest is Dr. Zin, who is attempting to beat Benton to these portals for his own benefit. These vortex serves as the method in which the various characters will inevitably mesh together. It’s a plot that is straightforward enough to serve its purpose, because anything more complicated would distract from giving these characters proper introductions and interactions with one another, which is the draw for most readers.

Oddly enough, during the action, the art changes from Shaner to Steve Rude. While it is slightly distracting, Rude’s cartooning is consistent in style and equally as engaging as Shaners. It is, however an odd choice to include a backup artist in the middle of the first issue’s exposition. Luckily with bright coloring by the terrific Jordie Bellaire and some solid lettering by Dave Lanphear, the shift is not jarring at all.

BUY! Before reading the comic, I wondered if it could only be recommended to readers that would feel nostalgic towards the properties. I certainly like the characters, but frankly have no familiarity outside what I watched on Cartoon Network in the early nineties. After I finished, I realized that there was too much fun in the execution to not give it a recommendation to anyone who enjoys a little bit of timeless adventure.