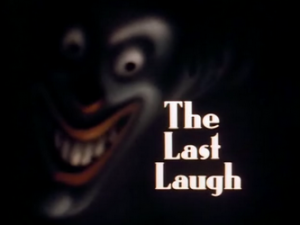 Synopsis: [from IMDB, see Link: here] The Joker’s plot to send all of Gotham into insanity with Joker-gas from a garbage scow leads to a battle on the water.

Originally aired on the 22nd September 1992, The Last Laugh is the fourth episode of the series (in production order), while also acting as the second appearance of Batman’s arch nemesis the Joker. While the episode marks a slight improvement from the villain’s original lackluster appearance in Christmas with the Joker, the episode is still not without its flaws, some of them almost identical to that of the arch-villain’s debut showing.

The episode follows a rather generic plot, which focuses on the Joker sailing a garbage barge through Gotham City on April Fools Day; one that is doused with an chemical gas, which infects laughter on any who come into contact with it. This leads him directly into conflict with Batman, who attempts to stop Joker from turning the city’s inhabitants  permanently insane due to lengthy exposure from the gas.

Like Christmas with the Joker before it, it’s in the animation, where this episode mainly suffers (again, courtesy of AKOM Production Co). Here, many of the characters, particularly the Joker, appear to be ‘off-model’ from Timm and Radomski’s original designs, and appear inconsistent between scenes. Not only that, but the jerky animation and poorly painted cells make it difficult to watch at times, something that’s especially glaring when presented against some of the scenes  in Of Leather Wings or even Nothing to Fear.

The writing isn’t much better, with Batman and the Joker’s dialogue mainly consisting on cringe enduing puns and one-liners. I’ve read many people say that the series’s writing only kicks into high gear with the introduction of Alan Burnett as one of the series head writers/producers. As it stands, I would be inclined to agree. Burnett’s tenure would begin with the Two-Face 2-parter and so I am looking forward to that when it finally comes around.

Furthermore, the Joker’s conclusive defeat is one that is ultimately rather anti-climatic, in that he simply gets caught on a wire after what had been a fairly dramatic chase. Again, the writers still seem to be finding their footing regarding the sandbox they are creating. One such example can be seen with the inclusion of Captain Clown, the Joker’s robotic henchman. Although I find the character fun, and even enjoy the fact that he acts as a ‘Terminator-esque’ physical threat to Batman, his inclusion does indeed seem strangely out of sync with the rest of the series, particularly as HARDAC have yet to be introduced. The same could be said about the Joker’s submarine, although that is somewhat more forgivable.

One positive however, about The Last Laugh’s writing is that at least this time more of the jokes hit their intended mark. Alfred’s quip to Batman “Not having a funny bone in his body” or the Joker screaming “You KILLED CAPTAIN CLOWN!” are among the two standout laughs due to the voice actors excellent delivery. Also of note is the change in Alfred’s voice actor to that of Efrem Zimbalist Jnr, who brings with him a much more human, homely appeal, as opposed to the stuffy, uptight interpretation taken by Clive Revill.

On the subject of voice actors, Hamill’s Joker again steals the show, swaying between vicious lunatic and humorous jester. Even though the Joker’s first two episodes have so far been the poorest, its still not difficult to see why Hamill has gone on to become the definitive Joker. What’s more interesting is the development of the Joker’s specific MO within the series; specifically that he commits crimes to get Batman’s attention and that the actual criminal element is not fun unless Batman isn’t trying to stop him. The Joker isn’t so much obsessed with robbing banks as he is at causing chaos, something that he knows will attract Batman so that they continue their never-ending dance again and again. Also of note, is the use of the Joker’s signature laughing gas, which causes prolonged insanity once people are exposed to it. Many of the writers, including producer Bruce Timm, knew they could never have the Joker kill during their series, and instead had to settle for the character leaving his victims with his distinctive rictus grin upon their face; something they soon realized was probably worse!

One little piece of trivia that I forgot to include during my review of Christmas with the Joker, was that the role of the Joker originally went to that of Tim Curry, of Rocky Horror Picture Show fame. Although he recorded several episodes, Curry was soon replaced by Mark Hamill at the behest of a producer who was not impressed with Curry’s performance. While I’m happy that Hamill did get the part, I am somewhat intrigued by what Curry’s voice would have been like, particularly having come off the back of the TV adaption of Stephen King’s IT, where he had played the part of Pennywise the dancing clown.

To conclude, although this episode presents some interesting ideas and Hamill’s Joker is again on top form, the episode is sadly one of the weaker installments of the series. Suffering from a weak script and poor quality animation, The Last Laugh, although a slight step up from Christmas with the Joker, is ultimately flawed, especially with comparison to some of the other episodes I’ve reviewed so far.