Think about your actions with your family versus your actions with your friends. Often, we act a certain way with one group and another way with the other. With our family, we may attempt to highlight our good points, the actions and traits that make us good children in our parents’ eyes. With friends, we may seem like completely different people. We may engage in actions that would make our parents’ toes curl, or say things that would make our grandparents blush.

Depending on the situation, a person may act differently. The situation I presented is a natural one, one that in many cases does not cause great stress on the individual. They may be fundamentally the same person in both situations, just emphasizing different aspects.

Carl Rogers was a humanist psychologist. His approach focused on the individual present, often called client-centered therapy. His method relied on authenticity, unconditional positive regard, and a reliance on the client to direct the flow of therapy. The client comes with a self-concept, a view of who they are. That self-concept can be divided into three parts: the real, the perceived, and the ideal selves (I promise we are able to talk some manga here in a minute). When those three selves are the same, the person is said to be congruent. When the gap between them widens, the person is in a state of incongruence. Incongruence is the heart of Rogers’ theory of psychopathology, why people are in a state of mental distress. A congruent person can self-actualize and lead a genuine, authentic life.

Horimiya is the manga adaptation of a web comic Hori-San to Miyamura-san by HERO. The manga adaptation is by Daisuke Hagiwara, and the volumes are published in North America by Yen Press. The story is a slice-of-life friendship and romance drama featuring Kyouko Hori and Izumi Miyamura. Hori is a popular, well-liked young woman at school. Miyamura is a gloomy, boring young man with no friends. The two teens are completely different away from school and peers. Hori is in charge of raising her little brother when her family is out of town. She embodies the housewife motif, cooking, cleaning, and caring for her brother. She is not necessarily ashamed of her role at home, but she does not want her friends at school to witness this version of her. One day, her little brother comes home with a bloody nose. He is dragging a teenaged boy behind him, one with long hair pulled up into a ponytail, piercings all over his face, and tattoos. It takes Hori some time to realize that the young man is Miyamura from school. The two quickly reveal that the personas they take outside of school are ones they do not want to share with anyone else. 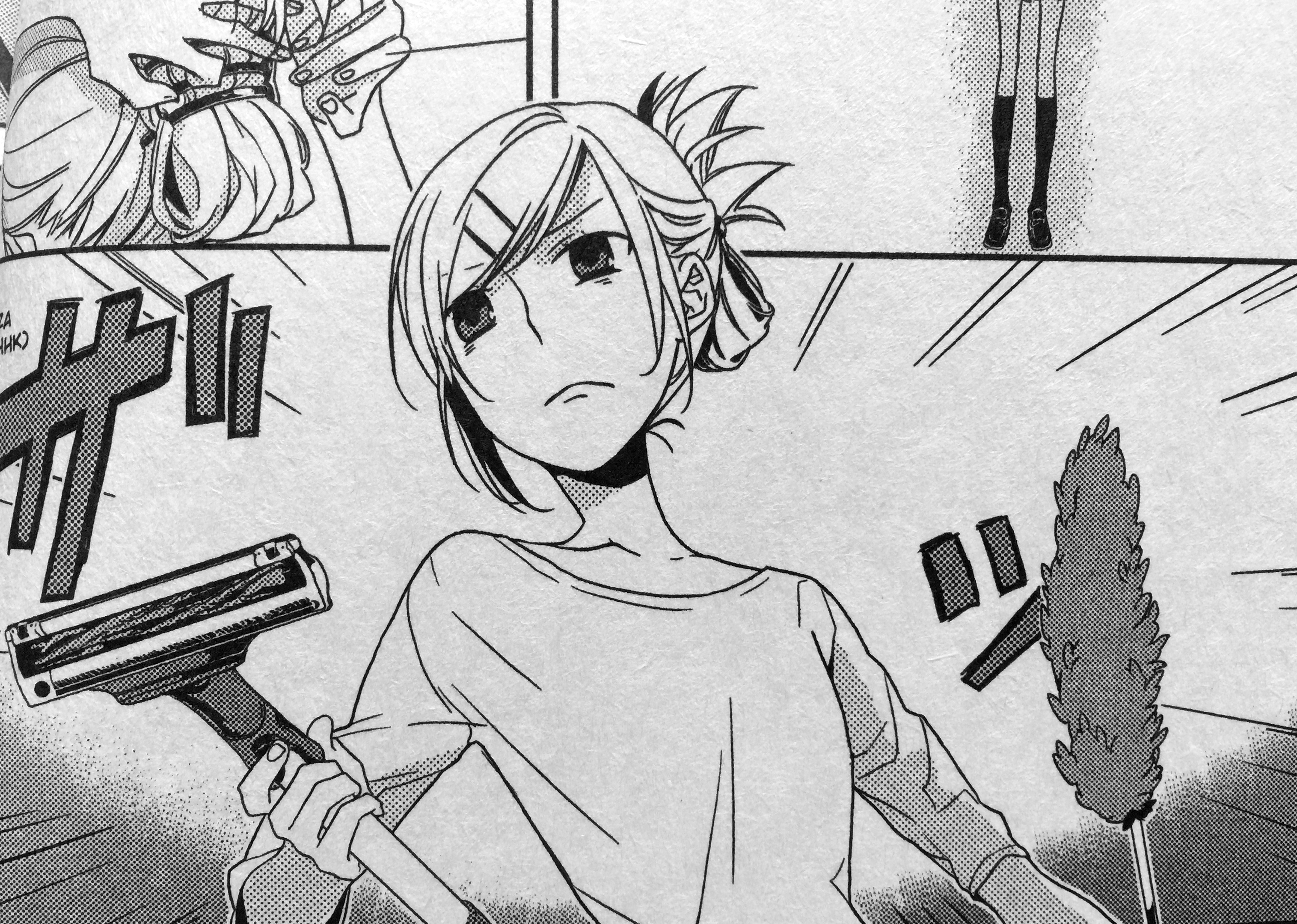 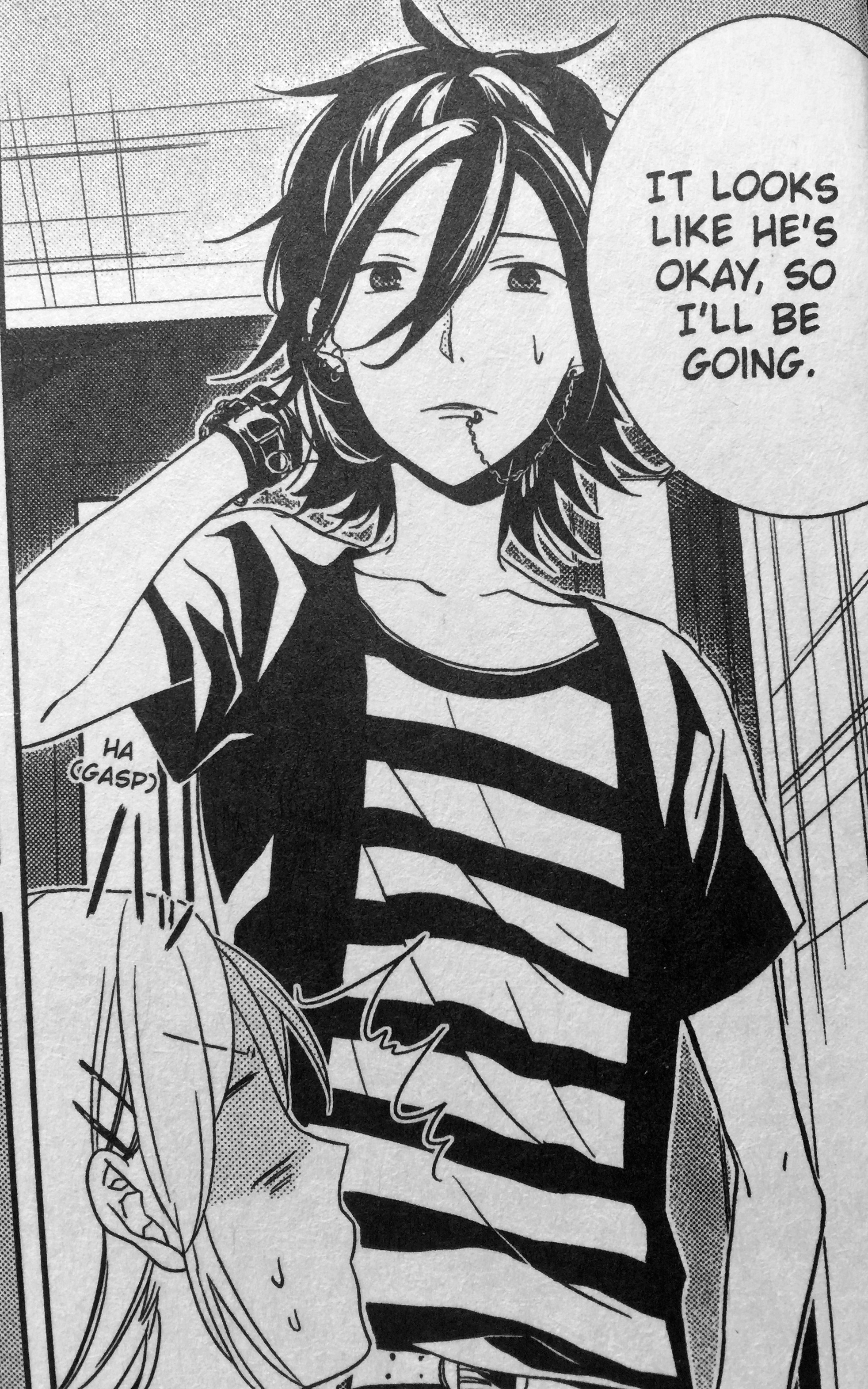 As the two teenagers hang out after school, they learn more about each other and why they keep their real selves separate from the selves they’ve created at school. School is often a setting for conformity, where students strive to fit in and develop social groups. Those that stand out can be ostracized by the majority. For some, this creates a survival mechanic where they blend into the groups or blend into the background. Hori fits the high school mold; Miyamura chooses to fade away. They have created a perception of themselves for their peers. Their real selves, the version that presents itself without environmental influence, are ones that would be rejected by peers.

What results is a bond between the two that centers on their real selves. Early into the friendship, Hori let’s slip, “I don’t want anybody but me to see this side of you.” Miyamura takes a minute and responds in kind, letting Hori know what he likes about her real self and how he “wouldn’t want to share all that with anyone else”. In doing so, the two have created an unconditional positive regard for the real self while simultaneously discouraging the integration of real and perceived selves. Later in the series, Hori becomes jealous when other girls see Miyamura at his family’s bakery dressed as his real self. If her reaction is any indication of her feelings, she has a strong connection to the real Miyamura that is threatened by exposing his real self to his peers.

Hori and Miyamura lack congruence, and the difference between their real and perceived selves can create stress in their lives. Miyamura fully covers up every day, even in hot weather (the plain white shirt of the uniform would show his dark tattoos on his arm and back). Hori misses out on social engagements because of her responsibilities, but refuses to reveal the reason behind going home early. While their daily stresses are manageable, it is easy to see how they can build into more substantial problems as they continue. Further, without the positive regard they extend towards one another, their incongruence could become more severe and therefore more urgent to rectify.

The example set forth by Horimiya offers an opportunity to examine the incongruences of our own lives. What is the persona we extend to the world? Does our social media profile match our real self? Do we even like our real self, and how close is that real self to the ideal self? What would people do if they met your real self? Horimiya allows us to reflect on our own problems in a safe, nonthreatening environment. Readers can learn the benefits of staying true to themselves and developing friendships within the context of the real self. If you pick up this series for yourself, pay attention to the real and perceived selves of Hori and Miyamura and what they would gain and lose from integrating their selves.

Rogers, Carl. (1959). “A theory of therapy, personality relationships as developed in the client-centered framework.”. In (Ed.) S. Koch. Psychology: A study of a science. Vol. 3: Formulations of the person and the social context. New York: McGraw Hill.