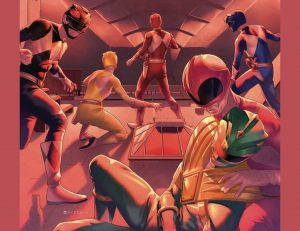 In an age of “dark and gritty” reboots, there are some that just get it right. And Kyle Higgins’ and Hendry Prasetya’s Boom Studios MMPR comic series is one that gets it right in spades. Higgins shows an obvious love for the property and the characters, paying tribute to what was great about the show while giving it a weight and seriousness that the original show could only hint at.

Guys… it’s really good. It’s the Mighty Morphin Power Rangers we’ve deserved for quite a long time. Even if you’re not a fan of Power Rangers, you’ll really enjoy this.

Issue #3 continues the focus on Tommy as he tries to recover from his only-recently-broken evil spell. His hallucinations are out of control now, to the point that he can’t really tell dream from reality. The Rangers are trying to help him, but they’re also dealing with a healthy amount of distrust. They want to welcome him to the team, but how can they when he’s twitchy, standoffish, and now hiding his problems. Of course, Rita Repulsa has been orchestrating this whole thing, and while we sort of know what she’s doing, we don’t entirely know the full extent of her plans. It’s definitely more complicated than sending a gimmick monster to attack Tokyo… I mean Angel Grove.

Perhaps the best thing about this comic is the attention it pays to characters. The comic explores Tommy’s trauma in ways that are only hinted at in the original show, as well as the difficulty he has in fitting in. He’s not really the Frank-Miller-Wolverine character that many fans want to make him. His standoffishness and loner nature are rightly called into question for a superhero team that specifically works best as a team… a team which he was up until recently trying to destroy. Through it all, though, he mainly just wants to belong.

Tommy’s not the only character to get developed. Higgins takes the basis of the characters from the show and makes them developed and real. In this issue, Zack and Trini get the spotlight, two characters who were sorely underdeveloped in the show. Trini shows that she’s not only highly intelligent, but she also runs the medical equipment in the Command Center, and her medical bent is carried over to watching out for everyone’s wellbeing, both physical and emotional. Zack is still fun and easy-going, but in this issue he’s the main voice of suspicion about Tommy, wondering how they can know what’s going on in his head. I’m really excited to see how Zack is developed, as the original character was often limited by 90’s casual racism. The next issue will be a one-shot that focuses specifically on Zack, and I can’t wait for that.

Higgins also makes the villains into characters we can believe and actually like. This issue begins with Goldar, a character who began as a formidable opponent but who slowly grew into a comic relief character. There is nothing comic about him here. He sits in the Dark Dimension, apparently banished there by Rita, and stoically refuses food any anything else because of how he failed his mistress. In just that one page, we see a Goldar who is stoic and noble, loyal to his empress to a fault. Rita and Scorpina are also completely wonderful. Rita is imposing and formidable, as well as cunning, with a lot of complicated plans going on at the same time.

The art does a good job of portraying the characters, and the expressions on Tommy and Kimberly are particularly compelling. Prasetya is able to convey a lot of subtle emotion. I wish he would use those touches on Billy, who seems distant and sort of hiding behind his glasses, though that may be a stylistic choice to highlight the character’s social awkwardness. The backgrounds are really good; Prasetya is able to use the flimsy sets and Japanese footage to create atmosphere. It really looks like they’re in a futuristic alien Command Center, or a space witch’s evil palace on the moon.

Verdict
Buy it now, and get caught up in back issues if you can. If you can’t tell, I have a lot of feelings tied up in Power Rangers, and it’s obvious the creators are like me. They’re taking the action, emotion, and high drama of the original series and making it modern and accessible.