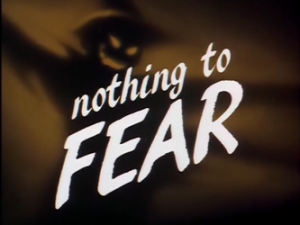 Synopsis: [from IMDB, see Link: here] Batman faces off against the Scarecrow whose fear gas makes the superhero afraid of disgracing the Wayne name.

For many people, Nothing to Fear holds some degree of fondness, particularly as it marks the first appearance of the Scarecrow within Batman: The Animated Series, voiced by Henry Polic II. Having not been previously introduced within the 60s TV Show, this was many children’s first encounter with the character; particularly for those who may not have had access to the comic books. As a result, Nothing to Fear becomes quite noteworthy in its approach to the Scarecrow, providing a great introduction to the character, while also providing a poignant piece of character development for Batman himself.

The plot, in a nutshell, focuses on Batman facing off against the Scarecrow, who has been undertaking a series of vengeful raids on Gotham City University. As Batman confronts this new super villain, he becomes subject to the criminals signature fear toxin, which, in turn, forces him to confront his inner most fear: that of him bringing shame to the Wayne family name.

Unlike the previous episode, Christmas with the Joker, the animation largely seems much stronger in this episode. Although the 10th episode to air, Nothing to Fear acts as the third episode in production order and seems a much stronger episode than its predecessor. The writing is also better, with the series’s focus returning to character development, rather than cheap gags to inspire thrills in its audience. While the set pieces are characteristically strong (and come complete with A-Team inspired shots of character’s surviving falls that might have otherwise proved fatal), it is the cityscapes of this episode that really stand out; its dark, neogothic skyline, complete with statues and skyscrapers bring Gotham city to life beautifully.

As the first appearance of The Scarecrow and his alter ego, Jonathan Crane, this episode does well to demonstrate what makes the character so excellent a villain. This is the first and only time this more simplified character model is used and is something that would be changed in future episodes into a slightly more frightening design, before transforming into an all out horror movie monster style in The New Batman Adventures. Although this is the weakest design of the three, this episode nevertheless works as a very strong introduction to the character and appears as one of the stronger ‘Scarecrow’ centric episodes in the series.

One of the most effective aspects of Nothing to Fear is the episodes use of Scarecrow’s fear toxin, something that although diluted in its content, is still quite effective, with some some very memorable set pieces being used to exploit this signature weapon.  Here, Crane can be seen either conducting fear experiments with students or causing incredible trauma to his unfortunate victims –  releasing a legion of spiders upon their person or withering the flesh from their bones. Not only that, when Crane’s devices are turned on the Dark Knight, we also gain valuable insight into Batman’s own character, something not before seen in either of the previous episodes.

The episode demonstrates some of Batman’s innermost fears; but it isn’t his fear of Bat’s that takes centre stage here (as shown in Christopher Nolan’s Batman Begins), rather his fear of failing his family following their deaths. This is the first time the audience is introduced to some of the pathos that defines this series. Not only is the viewer treated to beautifully rendered action sequences (complete with the signature blimps in the episodes main action sequence) and hallucinatory scenes of horror, we also get to see a glimpse inside the mind of Batman himself; a character who in following the Tim Burton/Michael Keaton model, has been as of late both insular and hidden. Kevin Conroy delivers his lines with his trademark bass, and even pulls off his character pieces with considerable aplomb and apathy. It’s no wonder he has since become the signature Batman voice actor for the past 20 something years. This episode is also notable as it is the first appearance of the iconic lines that would come to define Batman for years to come, namely:

The episode further ends with a satisfying conclusion. Although Crane escapes his confrontation on the blimp, he soon comes face to face with Batman in his factory hideout, where the tables are quickly turned against him and he is exposed to his own fear gas. Although this has since become the standard ‘how to defeat’ scarecrow conclusion, here it is used to cathartic effect and brings the story full circle in terms of narrative finality. Also of note, this is the final appearance of Clive Revill as Alfred Pennyworth, who is replaced after this episode by Efrem Zimbalist Jnr, whose performance would go on to become a mainstay throughout the rest of the series run.

Overall, while the plot within this episode may seem fairly mechanical, it’s a fairly serviceable and effective episode, particularly as an introduction to the Scarecrow as a character. Not only does it deliver the action sequences required, while also demonstrating the antagonist’s unique abilities, it also does a great job of threading a distinct piece of character analysis into the piece, allowing viewers to get to know the Dark knight in a way previous episodes haven’t. While the Scarecrow design would improve from the rather weak character model demonstrated here, this does function as one of the character’s best appearances in the show, and definitely left an indelible mark on me and many other viewers of my age.