This is the comic run that changed everything. Without it, there wouldn’t be a Talking Comics (there certainly wouldn’t be a Legendary Runs) because simply without Amazing Spider-Man, there would not be main stream comics. While it is true that Stan and Jack created The Fantastic Four half a year before, Amazing Spider-Man was the comic that made Marvel, and superhero comic books for that matter, return to popularity during the sixties. 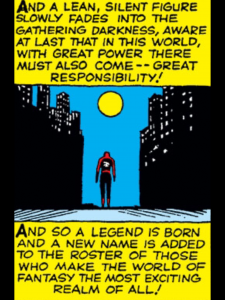 It has been more than a generation since the character’s premier, and I feel that with so many film and TV adaptations that the origin and early days of the character have been a bit muddied. For example, people often get the line from Amazing Fantasy #15 that has come to define the character incorrect. It is not “with great power comes great responsibility;” it is “…with great power there must also come great responsibly.” This means it isn’t that Peter must take on obstacles comparable to his power, but that the true power is that he elects to take on the responsibilities. Most people familiar with Spider-Man know all about his struggle to find balance between his life as a super-hero and his life as Peter Parker; what these early issues constantly present is a further personal struggle with conscious. While this message is told through the voice of Stan Lee, it is more personally planted within the artwork and sequential storytelling of the objectivist artist Steve Ditko.

While I’m going to save the infamous details of the editorial drama of Ditko and Lee for our discussion on the podcast, it does mean that this conflicted relationship is one of the contributing factors to the complexity of the character. These early issues are incredibly flawed. This was prime example of early Marvel Method, meaning Lee would come up with a plot outline, give it to his artist, then after the issue was illustrated (often ending up in a different direction than Lee had originally intended) Lee would then write dialogue and captions for a letterer. In the case of Amazing Spider-Man, you had Lee wanting to dictate what was happening in the art in order to bend the story’s focus in the direction of more action, while Ditko was far more interested in Peter’s moral and personal dilemmas.  Lee and Ditko’s frequent narrative disagreements during this process helped paved the way for what it meant to be a comic book creator, that if you are working with a creative partner, you must be a collaborator and no one person can tell a story over the other. 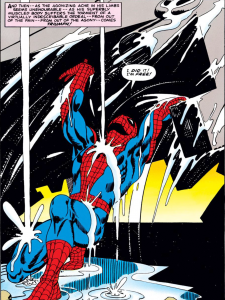 There are numerous other contributions that the series gives that became tenants of the Marvel Universe. The characteristic of the person under the mask is often more interesting than the mask itself, the relatability of the every-man crime fighter, the importance of a strong supporting cast, and with characters like the Green Goblin, Doctor Octopus, The Lizard, Kraven the Hunter and The Vulture, the importance of a balanced rogues gallery. Several of these factors had been seen in Silver-Age comics before this, but never were they more perfectly implemented and defined until Amazing Spider-Man.

I hope that you will join us this weekend for what will easily be one of the more important topics of our series. If you want to listen to an episode where we aren’t sure what we are talking about, check out our discussion on The Legion of Super-Heroes. After this week, we will be exploring a street level view of the criminal underbelly in one of the more popular procedural crime stories in super-hero comics, Gotham Central.

You can listen to our previous episode on Paul Levitz, Keith Giffen and Larry Mahlstedt’s Legion of Super-Heroes here and also on iTunes. Also if you have any questions or comments, please reach out to us at: