Paige Turner, Berger, Walter, and Pat are four kids who just like doing kid things. They play D&D, they tease each other mercilessly and they deal with typical school b.s.. That is until a group of strangers comes walking into Paige’s house uninvited and try to enlist Mr Turner’s help in a bank heist.

Why would they ask this normal guy to help them? Does he have a past he hasn’t told his daughter? How do these kids factor into the scenario? That’s the hook of 4 Kids Walk Into A Bank and it’s a tantalizing one. 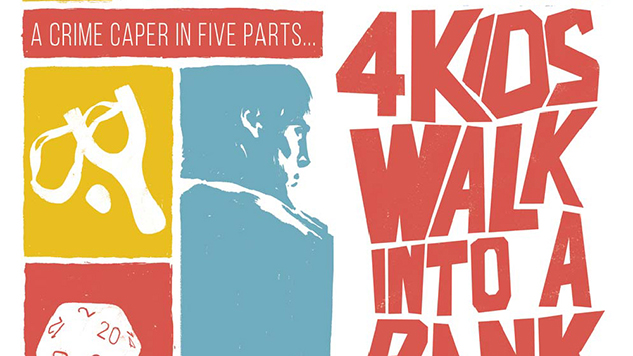 The biggest compliment I can pay 4 Kids is that it constantly surprised me. Matthew Rosenberg’s diverse writing style allows the story to weave itself from Dungeons and Dragons session, to tense standoff and then back to school aged hijinks. I can’t keep the book pinned down to just one tone and I love that about it. It also traffics in one of my very favorite tropes. Kids who are way more capable than the stupid adults who want to tell them what to do.

The story is full of great character beats. Paige (a.ka. Sir Manly)  is  smart as hell, but rough around the edges. She is brimming with attitude,heart and can take a punch. She is the clear leader of the group and its promising that she’s also the most interesting. Paige is awesome, but I found my biggest laughs coming from and at the expense of Berger a.k.a Crotch the Sticky. He’s that kid we all knew. The one who would put up the biggest attitude to try and hide his deep seeded self consciousness. The poor kid is allergic to ice cream for goodness sakes! He’s memorable as hell and I loved every moment he was in a scene.

Tyler Boss’ work is as stellar as his last name is cool. His style evokes thoughts of Chris Samnee and David Aja and it allows the visuals  to be as free flowing as Rosenberg’s script. I loved how he brought to life the imaginary world of the group’s role playing world.  It did not skimp on the dragons, but also feels very much of a piece with the other real world settings. His character work is full of personality and he is very adept in conveying the dark humor the book trades heavily in. Boss also does his own color art, and his muted pallet is effecting in conveying a unified style while never feeling bland.

Boss and Rosenberg together have created a first issue that makes me feel like I’m entering a living breathing world. The book is fun without being too light and just dark enough to feel important while not losing its charm. If this first issue is any indication 4 Kids Walk into a Bank is going to be the first great miniseries of 2016.