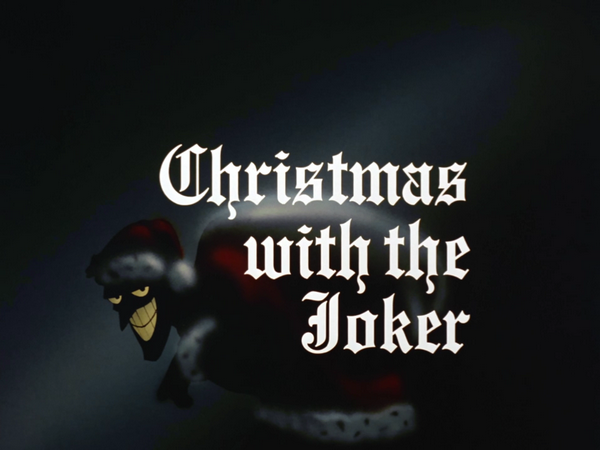 Synopsis: [From IMDB, see Link: here] On Christmas Eve, Joker broadcasts a pirate Christmas special on television. Batman and Robin have until midnight to fight their way past Joker’s traps hidden all over town and rescue Commissioner Gordon, Harvey Bullock, and Summer Gleeson.

Originally aired in November 1992, the second episode (in production order) of Batman: The Animated Series, Christmas with the Joker, is the first episode to not only introduce one of the main rogues within Batman’s vast menagerie of villains, but also presents the series’s interpretation of his most famous arch-nemesis, the Joker.

Sadly, while the series continues to innovate in terms of design, it’s quite noticeable that Christmas with the Joker, marks a substantial decline in quality, particularly when compared to the series opener, On Leather Wings. In this episode, the Joker escapes from Arkham Asylum on Christmas Eve and sets out a pirate television broadcast to the whole of Gotham, claiming that he is holding several people ransom. Batman, seemingly bored by the Christmas holidays and the lack of crime, jumps at the chance to hunt the Joker and drags Robin along to help him. As they travel across Gotham, the two heroes find themselves having to face off against a series of traps set by the Joker, before eventually confronting the clown prince of crime.

As noted, this is certainly one of the weaker Batman: The Animated Series episodes, particularly as it appears before Alan Burnett took over as writer/producer. While certain aspects of the plot are fun (particularly the references to Jimmy Stewart’s It’s a Wonderful Life (1946)), the majority of the story is somewhat cliched; the same Batman/Joker runaround that has been seen in the comics since 1940, without any of the focus on each character’s dynamics and their relationship to one another.

This was the only episode directed by Kent Butterworth and the only one written by Eddie Gorodetsky, and it definitely shows, particularly within this episodes zany, inconsistent tone when compared to later episodes within the series. Here, instead of the mature, character focused stories, with resonant themes and drama, the plot preoccupies itself with numerous gags (many of which fail to hit their mark) and clunky, poorly animated set pieces. Furthermore, the addition of such plot devices as a remote operated observatory cannon and giant toy soldiers seem completely out of place within the sandbox created by the writers. Although the series would later delve into science fiction and fantasy, with episodes like His Silicon Soul and Avatar, here such uses are only simple gags that detract from the overarching ‘rules’ of the story world that the writers were trying to set up.

Not only this, but perhaps the weakest aspect of this episode is its animation, particularly when compared to the series debut. Animated by the soon to be infamous AKOM Production Co., the episode has a less fluid, slightly jerky animated quality, while the Joker’s face seems to change the way it is drawn, sometimes within the same line of dialogue. It is something that becomes fairly off putting at times within the episode and again, sours some of the aspects that are fairly good.

One of these strong points, is that of Hamill’s masterful debut as the Joker. Throughout the comics history, the Joker has been interpreted in many various guises and forms. Like many pop culture institutions, the character has an incredibly ability to adapt with the times, from the original Man Who Laughs inspired gangster of the original Bill Finger/Bob Kane strips, to the more humorous interpretations of the 50s/60s, before returning back to the homicidal maniac of the more modern era, with Heath Ledger’s ground breaking portrayal in The Dark Knight and Brian Azzarello’s Joker graphic novel as two notable examples.

Despite these changes in personality, Batman: The Animated Series, manages to create almost the perfect version of
the Joker, one that blurs the line between funnyman and psychopath.The final scene from the episode, with the Joker in a straitjacket, dementedly singing ‘jingle bells’ to himself in his cell at Arkham Asylum (Complete with its long German Expressionistic shadows) is one of my favorite scenes within the episode and basically sums the character up in one sequence (also: how creepy/amazing is the title card!). As perhaps the series most popular writer, Paul Dini notes that to write the character as a complete psychopath: ‘…defeats the object of the character, because then he becomes totally unsavory.’ It’s a quote that I feel rings true, and Hamill’s interpretation brings out both these characteristics in equal force. With the creepy Blue Meanie inspired yellow grin, and (particularly in Christmas with the Joker), the character’s penchant for Bing Crosby inspired sweaters, it’s clear that this version of the Joker seeks to bridge both aspects of his personality, creating almost the definitive version of the character.It’s therefore no surprise therefore that whenever, I or many other people of my generation pick up a comic book, the voice we hear is Mark Hamill’s deranged, hyena-like cackle, emanating from its panels.

Hamill’s Joker is not the only major Batman character to be introduced within Christmas with the Joker. Batman’s famous sidekick Robin, also makes his first appearance within the series. Here, Robin is depicted more as Nightwing than anything else (a guise he would later go on to don in The New Batman Adventures in 1997), with Dick Grayson being portrayed as a teenage college student who lives on-campus, as opposed to the hotpants wearing child of earlier interpretations. It’s a mature depiction that resonates slightly better with an audience, removing any moral quandaries related to why Bruce Wayne allows a child to help him in his fight against crime.

In summary, after the brilliant On leather Wings, I think its fair to say that Christmas with the Joker marks something of a drop in terms of quality  within the series. While the episode is somewhat noteworthy for introducing us to Mark Hamill’s definitive interpretation of the clown prince of crime, as well as introducing Robin to the Batman: The Animated Series universe, the episode sadly lacks the quality of later episodes, particularly in terms of writing and animation.