As a big fan of Ms. Tarpe Mills’ original Miss Fury,  I’ve written of my dis-satisfaction with Dynamite’s last off-model attempt at presenting comics’ first costumed heroine in her own series, so I was much chastened when I saw the preview art for this new series’ first variant cover by artist Jonathan Lau (seen to the right), which struck me as more of the same overly violent schweinerei… 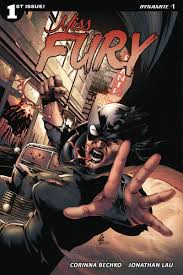 (Robert, please don’t tell me that you’re going to re-hash the themes from your old essay, darling? You’re not a young man anymore, and I’m not sure that your constitution can stand another such episode. You were so agitated the last go-round that you went out and became drunk,  very drunk indeed. @udrey)

Well Audrey, let me say that the first issue as written by Ms. Corinna Bechko (and including Mr. Lau’s interior art!) was quite good, and I’m very happy to report that it looks as if this creative team will be presenting a respectful version of Ms. Mills’ iconic character!

(It’s lovely to hear that you’re happier Robert, as I was beginning to worry that you’d be troubled again, and you’re oh-so-cranky when you’re troubled. Just carry on, darling. @)

The story is one of war-time mystery, as it is placed in Miss Fury‘s original setting of the 1940s, and Ms. Bechko and Mr. Lau open the action in the best Film Noir tradition with a late night break-in, this time at the office of Marla Drake (whom we know is the alter-ego of the mysterious avenger of the title!), so these gunsels have no idea what they’re in for: 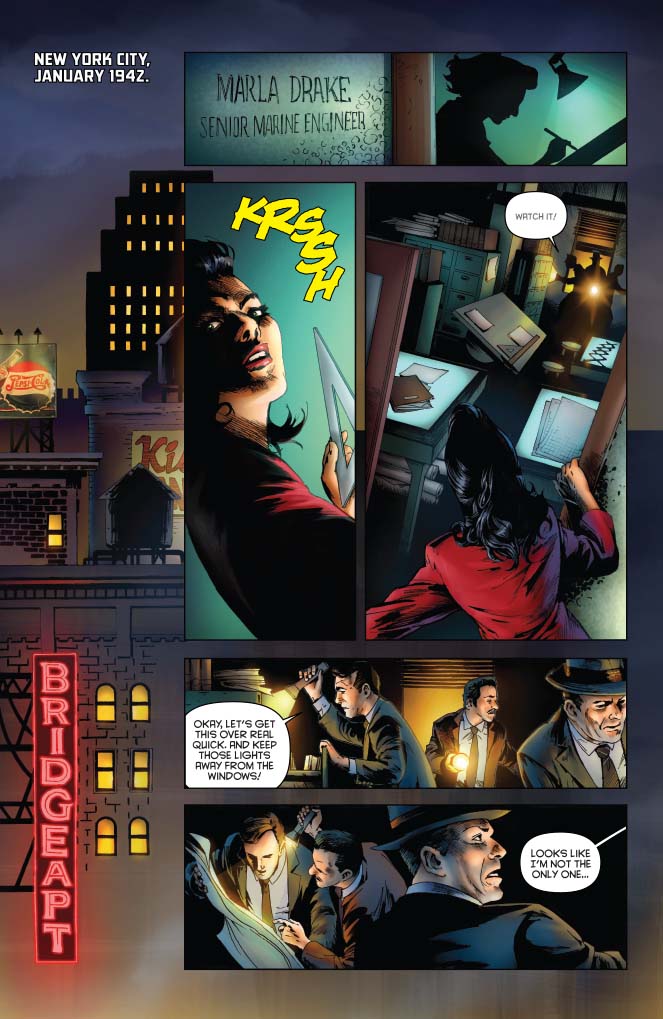 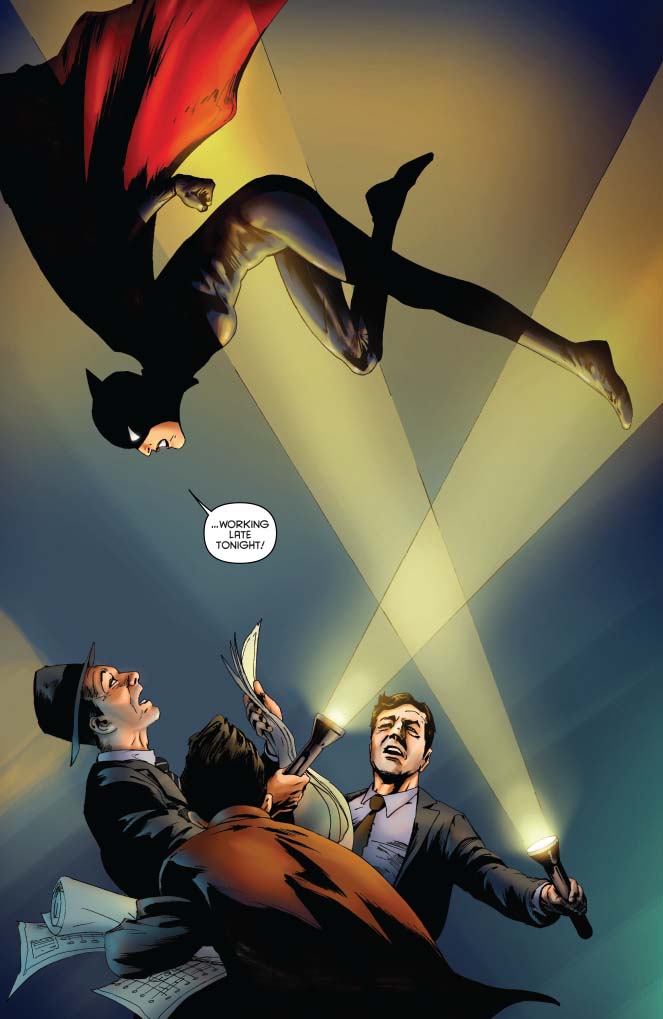 (Normally, I wouldn’t run such a large swath of story and art, but I felt it was important to give you a sense of the tone!)

The plot revolves around the motives behind the robbery, which netted them only a sheaf of blueprints for some rotors that Ms. Drake’s firm was designing as an adjunct to the war effort. Marla conducts her own investigation, and there-in lies the tale… 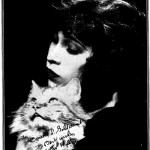 It’s only the first issue, but there’s great attention to period detail, and many nods to the Forties’ original, such as the South American setting for the flashback, and especially the cameo appearance by Marla’s cat Peri, who was not only in the old newspaper strips, but was in real life the pet of Miss Fury‘s creator, Tarpe Mills! The one major change from the original is that Marla Drake is no longer strictly a “socialite”, but now has the title of Senior Marine Engineer, and runs her own design business. Even if this modification runs counter to her roots, this change certainly gives her more agency as a character, although back in her day, Ms. Marla Drake (in-or-out of her panther-skin catsuit) took a back seat to no one in her drive to see justice done.

Writer Corinna Bechko has laid down a solid foundation for a fun mystery story that feels of-the-time and respectful of those qualities that made Miss Fury stand out from the pack from her inception, but with just enough modern touches so that it doesn’t seem a slavish re-tread. The artwork by Jonathan Lau (ably assisted by colorist Vinicius Andrade!) was not well-served by the previews, as there isn’t one instance within the issue itself that possesses that angry tone, but is instead a nicely-designed book filled with interesting page lay-outs that help to drive the action sequences, and their work in the quieter scenes is every bit as powerful. All-in-all, I found this first issue to be a winner, and one that I’m glad I overcame my trepidation over the previous series and picked up, so kudos to Dynamite, and most especially to the creative team for a fine job!

VERDICT: If you’re a fan of pulp-era heroes such as The Shadow or Green Hornet, or enjoyed Miss Fury‘s appearances in the various “Masks” mini-series from Dynamite, I think that you’ll get the same kick out of this first issue that I did, and I’m certainly coming back for #2, whose Tula Lotay cover can be seen below, next to the Tarpe Mills original to which it pays homage: 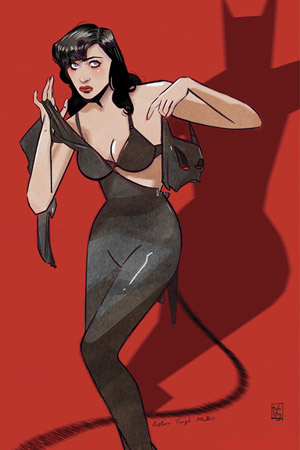 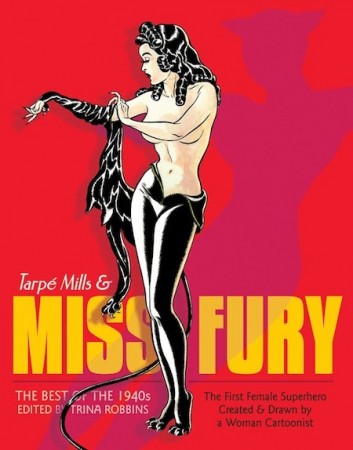 Addendum: Robert is loath to tell you, but he wrote two older pieces about Miss Fury that you might find interesting; one is about Tarpe Mills and the original , which will also alert you to the wonderful IDW collections curated by that dee-lightful Ms. Trina Robbins, while the other centers on the more recent Dynamite series that had dear Robert so upset. I’m sure that it would make Robert happy if you checked them out, darlings! @udrey