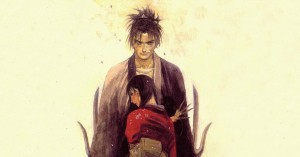 This episode of The Logic & Love of Characters will be an interview with a friend of mine who knows the comics industry from the inside and has spent a good amount of time helping create it. Shawna Gore was in the PR department for Dark Horse Comics for 5 years, has been an editor since 2002 and working freelance since 2011. She was introduced in her childhood to Harvey comics and thus began her lifelong love affair with graphic story telling.

Melissa Megan:  Tell me about the character you feel a very personal connection to.

Shawna Gore:  When I first started working at Dark Horse, I got really into the manga Blade of the Immortal, and a large part of my love for Blade was the character Rin, who is a teenage girl. Blade is a phenomenal series, in every respect. It’s gorgeous, the characters are great and really fully realized.

MM: What is it about Rin in particular that you think made you feel so drawn to her?

SG: Rin is this pretty innocent and well-meaning girl whose parents run a sword fighting school, until one day they are horrifically murdered by a rival school. The thing about Rin is that she is 100% not a bad ass. But after her parents are killed, she dedicates herself to trying to become a badass so she can exact revenge on her parents’ killers. And she fails constantly. I really identified with a few things about her.

For one, she was thrust into a really horrible reality, basically yanked from childhood into a world full of murder and mayhem. And as much as she was changed by what happened, and tried so hard to steel herself and deny her emotions and humanity so she could become the kind of killer she thought she wanted to be, she fails at that again and again. Because she’s not a killer. And she’s not very tough.

I loved all of the humanity and vulnerability in her character because it feels very real — we can’t just flip a switch and become someone different, you know?

MM: That sounds like a really well fleshed out character, very genuine. Even with such a fantastical back story.

SG: That series is the best. I also have a pretty big tattoo of Rin on my left leg, if that says anything.

MM: Did you feel like you had experienced some similar struggles? Trying to be a bad ass but knowing you’re just a big bunny snuggler? 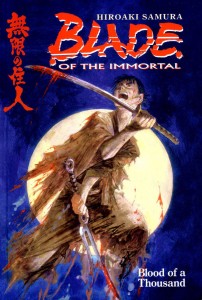 SG: In some ways, yes, but I am actually probably way more suited for hard stuff than Rin. My family life was really difficult when I was a kid — my poor parents were fucked up in a million ways and couldn’t keep their shit together at all. We were homeless a lot when I was a kid, for instance. So my softer side was something that developed in a way more after my childhood. But as much as my parents were screwed up (and my dad was just flat-out abusive—physically and emotionally), I always really felt for them and the things they experienced that made them that way.

Eventually, though, I realized I wasn’t such a hard person (obviously, right?), and that it was okay to be really wounded about some things. And to be sad. And to not be able to just get out there and be a badass every day. So in a way, reading about Rin going through this reverse experience to mine was really revealing to me.

MM: So, Rin was maybe a sort of mirror image of what you were more familiar with. Seeing that soft, innocent person try so hard to be harder. Transformation is something we can relate to in all forms, even if it doesn’t exactly mimic our own.

SG: And I really related all of this back to Rin’s story, and how she and her parents lived in a very harsh world, and they were doing their best to just keep their little family going. And to the desire to transform, but not really being able to do it … because nobody can be 100% anything.

MM: I love that. Character as therapy, comfort, to deal with life.

SG: It was very emotionally revealing to me at that time. I was 24 and had just moved to Portland from Northern California, basically to get away from my parents for the first time. I was always close to them and in contact, but I had to physically remove myself to have my own life.

MM: I see many similarities in Rin to Rey, from The Force Awakens.

SG: Yes! Rin basically dedicated her life to trying to fight the forces that killed off her family. In a way, I think just pursuing a healthy, non-fucked up life is my way of doing the same thing.

MM: So, now, as an adult and a parent, do you still feel that connection as strongly to Blade of the Immortal and Rin?

SG: I do. I’m surprised at how emotional I started feeling just thinking about her story. And what it meant to me when I found it. But now she’s closer in age to my son than me, so I see it from that perspective, too.

MM: It sounds like she was a guide of sorts for you through that tough time. And eventually little Elliot will be searching for his own guide in the chaos of teen in to adult years! Do you wonder yet where he will be drawn? Like, do you try to imagine what sort of characters he will attach himself to in such a strong way? 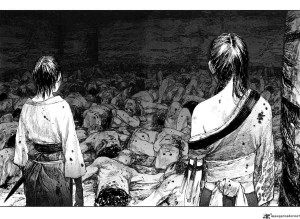 SG: You mean besides to diggers and tow trucks?

MM: I know he has a fondness for Mr T already.

SG: I do wonder, though. For all the typical boy stuff he seems in to, he spends half of his time wrapping his toy trucks in blankets “keeping them safe and warm.” He definitely shares my soft and squishy core.

MM: Ha! And his pumpkin baby. He’ll need the hero that is also a nurturer.

SG: I like that! I mean, I think fiction is taking a turn to acknowledge more dimension in general with characters, so maybe those examples will be in abundance for him.

MM: We can only hope! Both in male and female characters. Thanks for sharing this with me. I haven’t heard of Blade of the Immortal before, so it will be fun to share your affection for that series with readers.

SG: It is pretty phenomenal. And if you have an anti-manga preference, it’s the series that will show you how varied manga is. Hiroaki Samura, the creator, is also a huge heavy metal fan, and the main bad guy is named Kuroi Sabato (Black Sabbath). I mean. There are about 1000 reasons I fell in love with it, to be honest. Thanks for asking.

MM: That’s all incredible and gives me more reason than ever to be interested in reading manga.

SG:  I’m actually writing a graphic novel script (finally) right now that taps into some of the family history we talked about.

MM: That’s so exciting! Keep me posted on that, I’d love to help get the word out when you get it in production.

SG: Thanks! I’m excited just to write it.