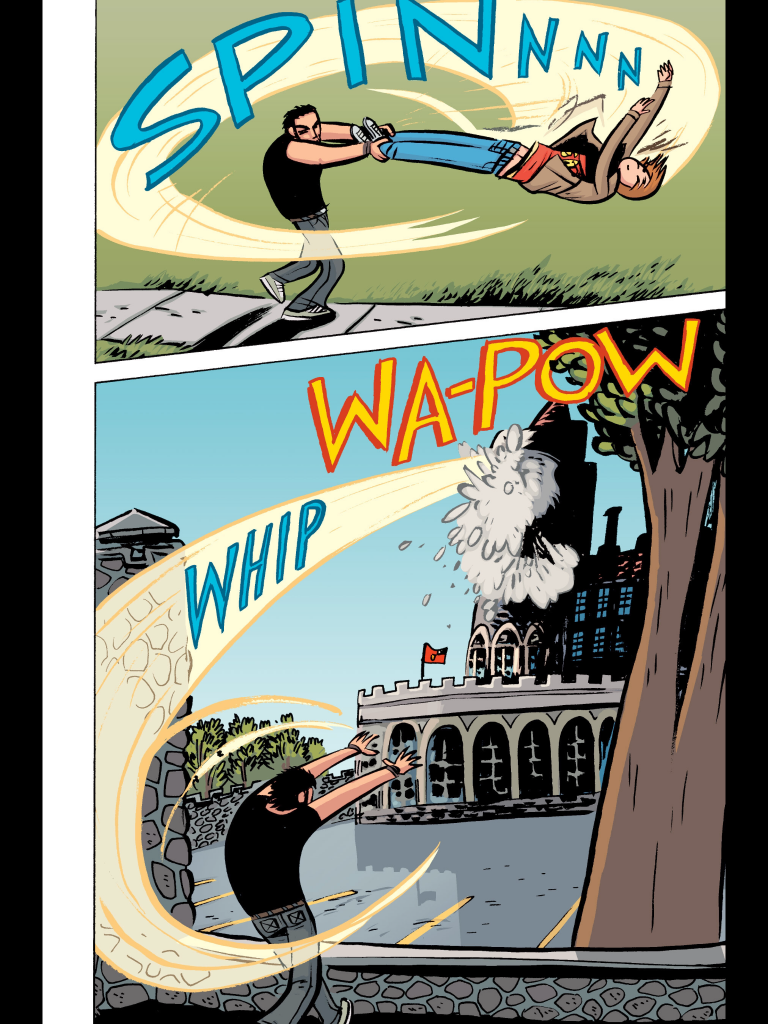 Bryan Lee O’Malley knows how to handle frustration; that is to reverse the normal negative connotations associated with the emotion into a positive. While you read this series you groan at the decisions that the characters make and the things they say because this book is a very strange mirror into the reader’s personal life. After reading a few of the things Scott says, I would say to myself, “I would never say that” only to remember very stupid and very regrettable things I have said in similar situations.

If I’m not careful, I would say that Scott Pilgrim might be the most relatable comic series that we have read so far. It isn’t though. While some of the the situations, settings and interactions are incredibly familiar, I don’t have insane supernatural fighting skills or a life surrounded by subtle video game and comic book references. I have, however, imagine punching someone so hard that they evaporate into a pile of coins like a villain in River City Ransom. The reason why these exaggerated moments happen and are so catching is because they represent the metaphorical moments in our lives. While it is unusual for someone to have defeat the evil exes of someone they want to date, it is likely that they must overcome the emotional baggage each relationship places on the one to come after it.

It is not hard to believe the legacy that this book has cultivated. It might be the biggest cult property of the past generation. Not only is the comic a cult classic, but so is the film and the video game based off the series, and the soundtracks released for both of those adaptations. People care about Scott, Kim, Knives and the rest of these wonderfully developed characters. Go to any convention and you’ll be hard-pressed to not run into a Ramona. As any example of brilliance will show, it cannot be replicated. Many people have tried to capture the something special that is Scott Pilgrim, but whether it is comics, movies, games or music, O’Malley’s creation has remained unique.

Another testament to this book’s longevity is its demand to be read more than once. It’s a very hipster thing to say about a very hipster comic, but it was meta before meta was cool. Each volume will make a self-aware reference showing a character directly explaining to another that a revaluation will be revealed in the next book. It is a lot of fun to come back to and I hope that you enjoy this episode whether this is your first time or your tenth. If you are a fan of this podcast or this website, it is easy to assume that you will love the references as well as the human moments in the Scott Pilgrim series.

You can listen to our previous episode on George Perez’s Wonder Woman here and on iTunes. Also if you have any questions or comments, please reach out to us at: