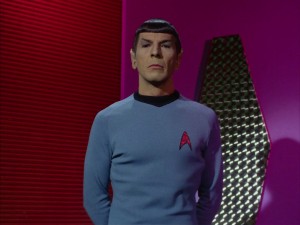 Bob Reyer: So, Melissa, I know you’re a well read person in so many areas, you read comics and watch so many movies, just wide ranging interests. Across that spectrum, what fictional character do you feel that special bond with?

Melissa Megan: This is an easy one for me to answer, it’s Spock. I jokingly refer to Spock as my “spirit animal”. My first exposure to Star Trek was The Next Generation, because that’s what was airing when I was growing up. While I really love Next Generation the most, especially Captain Picard. When I did go back and watch The Original Series, I felt I could really relate to Spock. I could relate to his struggle in making himself feel like a part of human kind; his struggle on a daily basis just to communicate with people. The way he couldn’t understand why people responded emotionally when it didn’t make sense in a given situation. I know it’s a weird thing to say, that you feel like you can relate to an alien, but I just do.

BR: You encountered this character when you were in your late teens?

BR: As teenagers, we are all that same ‘other’ that Mr Spock is. He’s trying to manage new relationships, deal with new emotions in himself. A lot of people don’t know (you certainly do) that Spock is not all Vulcan, he’s half human thanks to his mom and he’s trying to sort out “how much can I feel, how much do I hide?”. When we’re that age, we’re all having that struggle of who to talk to and who to keep everything from. It makes a lot of sense to me. What moment of seeing Spock, either in The Next Generation or as you drifted back to The Original Series, cemented that feeling of connection for you?

MM: That’s such a tough question. I can’t name a moment for you that specific, but I can say that it happened when I realized how much respect and love the crew felt for Spock, despite the fact that he wasn’t able to express himself the way that they did. They still wanted to build friendships with him and felt fondness towards him despite what many saw as a flaw.

BR: Yes! You could see it in the back and forth between McCoy and Spock, when you  watch Kirk struggle with the logic versus the emotion of a situation. As much as the doctor sniped at Spock, when those moments came that Spock was in peril, McCoy was as much by his side as anybody.

MM: He became of aware of how much of a strength it is to have what Spock brings to the table. Spock  brings something of great value, he brings logic, reason and rational to a situation where those things are often lost.

BR: Right, we all sort of fly off the handle without thinking about ‘what needs to happen here’. For me, the episode “This Side of Paradise”, where the Enterprise goes to a planet where everyone is under the influence of spores that open up all the emotions. Spock finds Leila Kalomi, who has loved him but he could never return that love until now. It’s heartbreaking and wonderful to see his internal struggles played out. There are other episodes where you see his anger, but here it was poignant. Is there something within the array of Star Trek films or shows that is your ‘go to ‘ moment that you think carries in to your life; a story you can share that can links the two together?

MM: Well, I had a particularly challenging childhood that resulted in anger control issues as a teenager. I lashed out at a lot of people who didn’t deserve it. My way of dealing with things was internalizing everything and focusing on self discipline. That ended up leaving me feeling uncomfortable in expressing emotion like other people do. So when I discovered Spock I saw a character who was going through a struggle like mine. I’m more comfortable being a logical, rational person and keeping emotions reserved because it helps me feel more in control. With that comes a sense that people don’t connect with me like I’d like them to; relationships grow when people can squeal and sob and share feelings. As a teenager, this made me feel pretty secluded, but I saw Spock find a way to show people how being logical, rational and reasonable is valuable. People around him found a way to build a relationship with him and respect him although he doesn’t jump for joy or cry with them.

In Wrath of Khan, I believe Spock made the choice to sacrifice himself because he was being human in that small moment and was thinking of his friends and his relationships – he was experiencing that intense emotional impact of the impending loss of everyone.

BR: When I saw that happen as I watched the film in theatres as an adult, there were no spoiler alerts to tell you what’s coming! I saw the camera pan to his empty seat at the science station and I just dreaded it, I knew what was next. But none of it would matter as much if it had not been Spock. And, oh, the funeral scene! If you don’t shed a tear when Scotty plays the bagpipes, you’re dead. Spock speaks to so many of us in our struggles to grow up, whether we’re the bookish type or the kid trying to suppress emotion.

MM: Every new Star Trek crew has a re-imagining of that original crew, with new faces and names, and sometimes they get it really right too. I always loved Data. Data is just an android who wants very badly to be human, which is what makes him so heartwarming. No one has been able to touch what Leonard Nimoy did with Spock, though.

BR: The peeks that we get to see through Nimoy’s artistry into what this character means and what he’s struggling with is what attaches all of us to him, at some level. The clever writing, the chemistry between those people. He, even as the outsider, becomes part of this family. So many of us go through that struggle of a new school, a new town, a new family, where do I fit in? That’s a struggle that will never end.

I know how much deep, true emotion you do have as a person because I’ve known you for a long time now, and we’ve shared some interesting conversations. Do you feel that the split in Mr. Spock’s personality between his human and Vulcan sides has heightened those moments when you feel most emotional? Do you feel like those interpersonal moments are as important as the logical ones?

MM: Yes. I absolutely think there are moments when it’s necessary to feel something stronger and to be a bit more exposed. I think when that time arrives, it should be done genuinely. When I am able to let go and get weepy or stoked about something, it feels that much more exciting.

BR: Perhaps when people read these interviews you’re doing, they can get in touch with the reasons they really love particular characters. The ones that are transformative to your own life or touch a place that you relate to are the ones that stick with you through life, no matter where it goes.

MM: On a selfish level, I wanted to do this column because it’s a form of fandom that I can understand. It feels rational and makes sense and I want to explore that more with other people. I want to hear the stories from other people of how a character influenced their life or why a character is so precious to them.

BR: I think this is the purest form of fandom, when a character is connected to one’s heart or psyche, as opposed to “it’s on a tee shirt”. What are the core values of this character that speak to us?

MM: Thanks for being my first reverse interview! You were the natural choice  to help me start off this new column, as we share this love for Mr. Spock.

BR: I don’t know how to wrap this up, because I just want to keep going, but here it is.

This is the first in a series of conversations Melissa will be hosting. They will be funny, lively, informative and touching. You will have insight in to the psyche (other peoples’ and your own). I’m thrilled to see this beginning and thrilled to be a part of it. Thank you, Melissa!

Bob Reyer was nice enough to conduct the first interview in this new series for me. All following interviews will be hosted by me. I hope you will enjoy this series and I welcome all feedback, including any requests to be a part of the series. If you have a special connection to a fictional character, please reach out to me and tell me a bit about that! -Melissa Megan 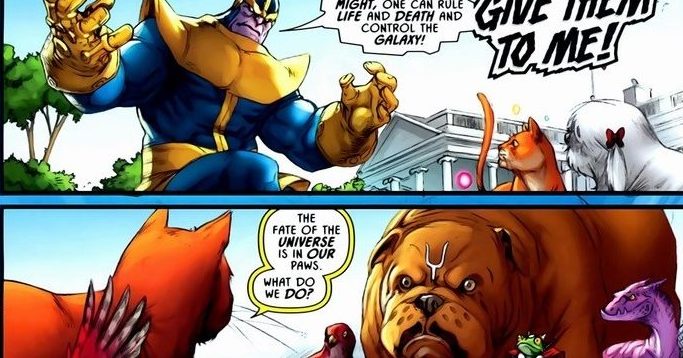 Thanos vs Lockjaw and the Pet Avengers: An Eight-Year Old’s Review