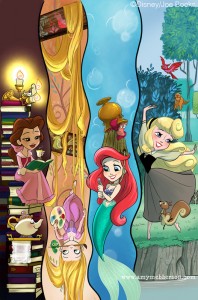 From the creative genius behind Pocket Princess comes Disney Princess! Amy Mebberson brought in with her two other writers, Georgia Ball and Geoffrey Golden, to help make this piece of funny, adorable, and untraditional storytelling. The comic includes Snow White, Ariel, Aurora, Jasmine, Belle, Cinderella, Merida, Tiana, and Rapunzel. The style of the comic mimics the webcomic layout. Joe Books Ltd published a unique comic with a creative layout. Interestingly, the design added more strips and stories to the comic and achieved more narratives in a small package. To top it off, there is a mini Zootopia story in the end. Be sure to open the comic from the back to read the story.

The story starts with many shenanigans including fake bucket princes, thinkcaps, no magic birthdays and other such adventures. The characters are amazing and have developed beyond the cartoons and television shows. They are more reminiscent of Amy Mebberson’s pocket princess’s snappy jokes and wit. The Disney Princess comic shares the ladies’ experiences humanizing them with their quirky characterizations and activities. They are more relatable and human in a sense more than their other portrayals. They also are more realistic and have more personalities showing through. They still do all the typical feminine activities however they show more spunk and more liveliness.

The liveliness of the characters and their activities is clearly portrayed through the art. The characters are American chibis, a more adorable version of the natural Disney form. It is hilarious to see how large their heads are compared to their bodies and their hair is probably 3 times their weight. They are bright and colourful as the rest of the cast. The expressions are very animated and detailed. Disney Princess shows their witticism and their interaction with their environment!  My favourite look though was the expression of self satisfaction.

The zootopia mini story is a reflection of the animated movie. The story is a short introduction to the nature of the relationship between the Sly Fox and the Fluffy Bunny (not their real names). It is also a preview of the cinestory comic coming in March 2016. The preview plays on human stereotype and mild racism through anthropomorphized animals. The message of the narrative is an anti-racism one and how it still exists both in the form of secularity and in subtlety in urbanism.  The art is a combination animation and realism. It is of peculiar soft, distinct urbanisation, and innocent design. I can’t wait to read the first issue.

If you like cute and cuddly art with a funny stories or you like alternative Disney Princess stories, Read it! 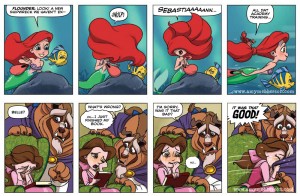 The strips of stories are self contained narrative as if they are stand up comedy about princesses. They are quick to the punch line and giggle inducing. The ladies are more than who they are portrayed as in the Disney movies. There is more life and dimensions to them. The art portrays the spirit of Disney with a slight chibi-like creativity. This comic is for those who like Disney princesses but bored of the typical stories, this is the one for you!