A remembrance of Sir Terry Pratchett; A love letter to an absent friend by Sarah Miles

I am sorry to write out of the blue, as you don’t know me, but I wanted to tell you something that is important to me. I miss you. You knew that you were ill, and you were kind enough to tell all of us that love you and your work, but it still came as a shock when you died.  It has been a year now since you passed away, which still doesn’t seem quite real to me. A year since I sat at my desk at work and cried my heart out, unable to explain to my co-workers what was wrong, and simply pointing to the news story on my computer screen. A year since I reached out to my ex to tell him the news, as I knew he would be as devastated as I was. A year since I had to email Bob Reyer and tell him, because he was one of the only people on the planet who knows what you mean to me and I needed someone to understand my grief.

I should probably give you some context, because otherwise this letter will make me sound like a bit of a crazy person. Or, in fact, a total crazy person. We have met, I’m not breaking all the rules of etiquette by writing to you out of the blue. Admittedly, we only met once, at New York Comic Con in 2012, and sadly you were already quite ill then. I was the weird girl at the end of the line who waited for three hours and ignored everyone who said I was after the cut-off point. Your PA on the day might remember me, because I cried when I met you, heaving sobs of pure emotion because I was exhausted and determined to shake your hand, and you hugged me and told me that it was all okay, even though you didn’t know who I was or why I was so upset.  Even as I am writing this to you, my eyes are welling up with tears and I’m going to have to stop typing and find a tissue.

When you read an excerpt from “Dodger” to us, earlier on the day that I met you, I realised just how ill you had actually become. I’d known, as we all had for some time, that you were unwell, but as with all these things we dismiss them and don’t think on them. It’s a sad part of the human condition that we believe our heroes are eternal but your passing last year proved that they are not.  When you read the excerpt, you struggled with the words, and Rob had to help you. You followed the story along though, and when he finished reading the last line you said that it was a lovely story and you were sure he would do well with it. You were so encouraging to him, and it was heart-breaking to realise that you did not, at the moment, remember writing the book. You still made jokes to the audience though, and you made us laugh as well as cry in that short hour, as you have so many times through your writing.

Meeting you was important to me, because your books are important to me.  The Discworld has always, for as long as I can remember, been a place that I can go to, and be with friends and laugh and sometimes feel sad and for that to be okay. I have always loved libraries, and my little local one always had your novels in stock. The librarian was a lovely lady and would order your books in from other branches and surprise me with them, and they never got old even when I had read the same ones over and over again.

If it wasn’t for you, I wouldn’t know Rincewind, or the Librarian, or Nanny Ogg and the other Witches. It’s partly because of you that I went to university and studied English, and it’s totally because of you that I then went back to university and trained to be a librarian. Sadly I’m not an orangutan, but some things can’t be helped.  It’s thanks to you that I found Neil Gaiman. I still love “Good Omens”, and I can hear both your voices in it. He in turn brought me to The Sandman, and that is where my love of comics started, which in turn took me to NYCC, and seeing you. Serendipitous, no?

I know that I am rambling now, but I wanted to let you know that I have bought my eldest “The Colour of Magic” and “The Light Fantastic” and he loves them. He has a friend at school that has already read all of your books, at the tender age of sixteen, and it makes me really happy that another generation are discovering your books. I’m sure that you would appreciate it, too.

News broke at the start of the month that another collection of your short stories for children will be released later this year. They might be getting a little old for it now, but sometimes the children still indulge their father and I by letting us read them stories at bedtime, and as soon as it comes out it will make it to the top of the pile. Which is a strange thing for me to say, because I haven’t read “The Shepherd’s Crown” yet. 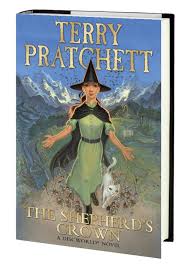 I want to, I want to desperately, but I just can’t bring myself to do it. I know that it’s the last Discworld book of yours we have, and that you left it for us to enjoy, but at the same time it’s the last Discworld book of yours we have. I told myself that I would re-read all of the Discworld novels to prepare for it, but it’s too hard. You probably think that I’m silly, missing you and not reading a book that I know I’m going to love, but Sir Terry, you have been such an important part of my life for so long that I simply cannot image a time without you in it.

I’m sorry to go on at such length, but there are few people in the world who deserve to be called a legend. You, Sir Terry, you are truly one of them.