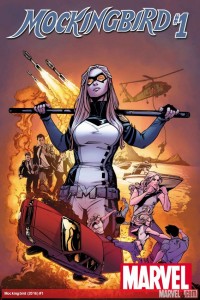 Mockingbird is an interesting character. She is a S.H.E.I.L.D. agent who is strong but not supernaturally powerful. Chelsea Cain brings us a story that introduces Barbara “Bobbi” Morse to the masses. The story starts with the conclusion of the first issue . The narrative presents as she undergoes a series of medical visits and an assessment of her mental health through time. Her experience with the S.H.E.I.L.D. Medical Clinic brings about cameos of different characters from the Marvel Universe.

That is not the full experience of the story, the best part of the story is how she presents herself. Mockingbird reflects on her strengths and weaknesses, her aggression and her simplicity, as well as her femininity and her casualness. She doesn’t care what people think of her and she fights for her quinoa. Bobbi is unapologetic and very direct with everyone she interacts with, but I think the story could have expanded more on who she is as a character for people unfamiliar with her. It builds up the adrenaline and breaks it with poorly paced waiting room interludes. It did not maintain my hype but it did make for an interesting take on storytelling. 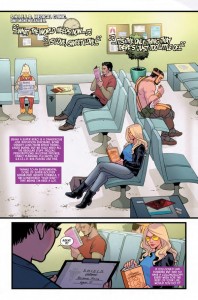 This is the first ongoing Mockingbird is in. The art translates well as Bobbi interacts with her environment. It shows how comfortable she is or not, especially with the psychedelic wallpaper. The devil is in the detail, or the lack thereof at times. There are so many details that enhance and reflect the characters presented that helped to enhance the art. However, Bobbi’s actions don’t feel particularly fluid through the layouts in the story. Although I have personal objections, the design might be a choice to enhance the mystery of unfolding in the arc.

Verdict:
Wait and See. The story is interesting and the art is on point. However, the art and the story together did not do it for me. The story was missing something. It might need more action or less static interactions in whatever capacity you want to look at it. Also, the use of the conclusion as an opening gave away the story and would have worked better if there was no prelude. Mockingbird as a character was not explored enough and it is her first ongoing. Though, her mental state was explored and I found that interesting making the narrative new and different. Hopefully the second issue would be more grabbing.

Kudos is deserved to the creative team for finally giving Mockingbird her own ongoing voice in the Marvel Universe, especially in Women’s History Month! Thank you!