Okay let me just get this out of the way first. I now officially think the team of Sean Murphy and Matt Hollingsworth can do no wrong. They are the Dream Team as far as I’m concerned. Or well, rather, the Dystopian Nightmare Team if the content of the books they work on together is taken into consideration. Hollingsworth’s colors always seem to have this soft, deep, dreamy quality to them, even when he moves into the brighter end of the spectrum. He’s a man who can manage to even make a pastel pink almost nightmarish, and his choices are the perfect compliment to Murphy’s highly detailed line work that evokes a sense of reality without ever really getting to near to it. 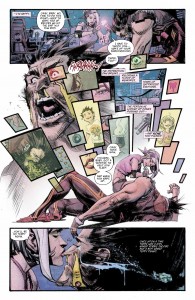 Murphy has risen to the top of the ranks of comic art because he truly seems to have an eye for the cinematic. He brings a sense of movement and tension into every panel he draws even when it’s only a scene of two characters sitting across from one another or a close up on a character’s face. Murphy may have been the perfect choice for this comic which is a pastiche of movie tropes.

At first, I really didn’t think Tokyo Ghost was going to do it for me. The first chapter comes at you with such an intense frenetic pace packed with motorcycle chases and faces ground into the pavement and explosions. It feels like the comic book equivalent of a local TV ad for a monster truck rally. I kept turning the page expecting to see SUNDAY! SUNDAY! SUNDAY! plastered across a two-page spread. The little bad we meet a handful of pages in rockets around on a hover scooter, seeing life through a heads-up-display like its all a videogame. He screams YOLO as he thoughtlessly sends a rocket propelled grenade into a crowd of innocent people. He’s so tapped into the internet that he has become it, and like… we get it. It’s a little heavy handed and, quite frankly, exhausting. Also, its one of those lines that will cement this book in the time it was written, which is unfortunate for a book that’s supposed to take place in the future. Hell, it’s only been six months since the issue was originally published and people don’t even say YOLO anymore. I really hope it doesn’t make a comeback in 2089.

It’s all prelude though. It takes Remender a bit of time to build out the premise of Tokyo Ghost, but once he does, it’s actually a really strong one.

From chapters two onward, you come to learn about the relationship between Debbie and Led Dent aka Teddy. You see how two people can grow to depend on one another when they think they’ve been abandoned together, and how addiction can drive a wedge between them, and how hard it can be to give up the person someone was when their vices get the best of them. Remender has the uncanny ability to quickly craft these fully formed characters that you find yourself deeply caring about.

If Tokyo Ghost declared itself completed at the end of volume one, I think you could call it a success, but I’m excited to see it continue. The dynamic of Debbie and Teddy’s relationship is left drastically changed at the end of the collection, and it should be an interesting ride.

Verdict
It’s great, but read it in trades. It would be like watching a movie in 15 minute increments otherwise.