For a generation of fans, Batman: The Animated Series stands as the definitive version of Batman. This was a award-winning series that has since become part of the canon, introducing new characters and concepts that have become threaded into the mythology of The Dark Knight. With its incredible voice cast, iconic design and mature storylines, the series represents a great landmark, not only in Batman’s fandom, but also within animation in general.

I’ve always wanted to revisit the series, returning to re-watch the series with a critical eye, taking note of the various pieces of trivia I’ve learnt along the way, as well as offering an informed opinion on how the episodes stack up.

Thanks to Talking Comics.com, I’m finally getting the chance to do this. ‘Returning to Batman: The Animated series‘, while admittedly not the most inventive title, will act as a monthly column, focusing of each episode of Batman: The Animated Series across its 4 season lifespan.  This column will focus on a critical analysis of each episode, focusing on the plot, characters, animation and even providing insight into some of the behind the scenes development behind what has become one of the most influential series in comics.

Not only this, I will bring a knowledge of the comics to the articles, noting the intertextual links between the different versions of the characters, as well as the suggested influences from other texts.  This has always been something of a passion project of mine and so I would like to thank Talking Comics.com for providing me the opportunity to do this. I hope you enjoy the content as much as I enjoyed writing it.

Well, without further ado, let’s begin with the first episode of Batman: The Animated Series – On Leather Wings! 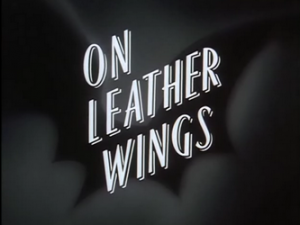 Directed by: Kevin Altieri
Written by: Mitch Brian and Bruce Timm
Original Air Date: September 6th 1992
Synopsis: [From IMDB, see Link: here] Batman finds himself tangling with a Jekyll-and-Hyde bat creature after it attacks a night watchman and the police wage a war on the Dark Knight.

Within the Batman canon, On Leather Wings stands as something of a landmark, particularly when the DC Animated Universe is concerned. It’s surprising, as although this was the first episode produced and is largely seen by fans as the first episode of Batman: The Animated Series, this was not actually the first story to air on TV. That award belongs to the 2-part episode The Cat and the Claw, which was pushed forward in the run possibly to capitalize on the summer release of Batman Returns, which featured Michelle Pfeiffer’s Catwoman as one of the film’s primary antagonists.

As it stands, the episode is a fairly effective introduction to Batman: The Animated Series, and while On Leather Wings might well be remembered for its innovative design and animation, it is quite alarming to note that on revisiting the episode, the actual story is fairly generic. In simple terms: Batman, upon investigating a series of attacks at several pharmaceutical companies, finds himself on the hunt for a giant Bat-like creature. As he investigates, he soon becomes mistaken for the creature and soon Batman must not only face the creature, but also clear his name.  In many ways, this episode follows such tropes as the ‘mad scientist’ theme, the ‘degenerative monster alter-ego’ and ‘the accidental framing of the hero.’ There’s also something of a failed red-herring as noted with the inclusion of Dr March, which in someway weakens the shock of the story somewhat. Yet despite these clichés, the episode runs at an incredibly quick pace and offers some beautiful animation to boot.

Squeezed within its 22 minute run-time, the episode succeeds largely as a great introduction into the storyworld of Batman: The Animated Series, grounding the aesthetic and introducing Batman whilst on the trail of a monstrous villain. This is an episode that wastes no time with an origin. Bruce Timm and his team were very wise not to go over Batman’s well-known creation and were instead focused on creating new adventures for the Dark Knight. Stories that were not necessarily re-runs of the well-remembered mythology that children and fans were already familiar with.

This is supported by the great use of the binary between Batman and Man-Bat, something that adds to this introductory episode in terms of theme. What could have been the introduction of a fairly well-known Batman rogues like the Joker, The Penguin or Catwoman, is instead replaced with that of Man-Bat, something that I think further works as a great introduction for Batman himself, without focusing on the previously overused origin. This also extends to the fairly equal focus given to both Batman and Man-Bat. In this way, the story is shared equally amongst both characters and it works for the better.

Though this is largely classed as the first Batman: The Animated Series episode, the story focuses less on Batman as a character, and more on him investigating the strange occurrences that appear to be happening across Gotham. What is great about this episode is that when we do meet Batman, we get to see the character as a detective, using his deductive skills and gadgets (shown in the use of his ‘Detective mode’ visor) to solve the mystery of the Man-Bat. It’s an interesting take on the character, one that not only demonstrates his proficiency in a fight, but also his skills as a detective. This is the episode that also debut’s Kevin Conroy’s now iconic voice as Bruce Wayne/Batman, something many comic fans consider the definitive Batman. Here, Conroy displays that rich, lion-like voice for the Dark knight, juxtaposed against a kindly, goofy incarnation of Bruce Wayne. I’ve always preferred this binary for the two personalities; that of a great transition between the serious Batman and the seemingly clueless, entitled Bruce Wayne. It’s something Christian Bale used so brilliantly in Batman Begins and The Dark Knight and is kind of the proto-Tony Stark that Robert Downey Jnr would later use in Ironman.

Alongside Batman, Man-Bat also appears as a fairly effective antagonist, particularly for this introductory episode. Originally created by Frank Robbins and Neal Adams for Detective comics #400, Man-Bat appears as a character indicative of the silver age revival of Batman, with a focus more on a darker, more Hammer Horror influenced aesthetic that would later become notable with such stories as ‘Moon of the Wolf’ and ‘Night of the Reaper.’  For starters, the design of Man-Bat here is absolutely brilliant (DC Collectibles recently brought out an action figure version, which is magnificent). Here, Man-Bat appears as a steroidal monstrosity, with a vast wingspan, yellow eyes and sharpened claws. One issue I’ve seen many people express with this episode is the character of Kirk Langstrom as Man-Bat. His motivations are blurry and unclear.

On one hand, it seems as though Langstrom is your archetypical mad-scientist trope, a man who has become addicted to the serum and craves the power he gains from transforming into his monstrous alter-ego. However, he also appears somewhat sympathetic, claiming he is a victim of his additions and even in a later episodes Tyger, Tyger and Terror in the Sky, appears as a protagonist, helping Batman in his adventures. I prefer to think of this characterization in terms of the ambivalence of Gothic – Batman’s stories have always had elements of the Gothic, full of transgression, degeneracy and decadence, something that certainly comes with this incarnation. Langstrom, doesn’t want to be man-bat as much as he enjoys when the Transformation takes over. I’ve seen people equate Man-Bat’s transformation to that of a werewolf, but in this instance I would choose another similarity. This incarnation of Langstrom and Man-Bat is more akin to Robert Louis Stevenson’s famous Dr Jekyll and Mr Hyde – a character transformed by addiction into a monstrous and destructive brute.

The episode also showcases some fairly effective actions sequences with Batman against the Gotham city police force. These action sequences would be more completely realized later in Batman: Mask of the Phantasm. Batman’s relationship with the police is much less realized here. In this episode, Batman appears much more as an independent agent. Although Gordon continues to support him, characters like Harvey Bullock and Mayor Hamilton Hill, still see him as a danger to the city and are focused on his capture. We also get an great cameo from Harvey Dent, a character that will later be transformed into Two-Face as part of the series ongoing mythology.

Perhaps the strongest element of this episode is the animation style, as well as the aesthetic of the story-world, which became the series greatest legacy. This episode established the ‘dark deco’ aesthetic of the show, revolutionary of its time and still very much unique to this day. Bruce Timm and Eric Radomski have both stated that this show was a turning point in the studio’s expectations for the series, in that it got several executives off their back with its exquisite style and production value.

This was an episode that was largely drawn on black paper as a request of co-producer Eric Radomski – something that added to the uniquely dark and moody atmosphere of Gotham City. From what I understand, although this became something of a great myth to talk about when mentioning the series entire run, only a few of the earlier episodes were produced using this technique (which involved airbrushing light colors on dark backgrounds), as the fumes produced were dangerous to the artists working on the project- so much that they had to wear masks whilst working! Needless to say, once the animators proved they could replicate the technique using white paper, they quickly changed!

As stated previously, the animation is great in this episode, with some very beautiful set pieces including Batman’s pursuit of Man-Bat, flying against the backdrop of the famous police blimps that dot the Gotham skyline. Langstrom’s actual transformation into Man-Bat is also incredibly well realized and slightly scary. In drinking the serum, Langstrom’s eyes turn yellow, his mouth transforming into a toothy grin, while a terrible shrieking sound permeates the scene. It’s a transformation reminiscent of the Universal monster movies of old, merged with the science-fiction ‘Creature-features’ of the 1950s, and it works to a terrifying effect.

Overall, despite On Leather Wings somewhat basic story line (complete with a weak red-herring), the episode manages to pull through due to its innovative visual style, Horror movie aesthetics and great set pieces. Not only that, we get a great introduction to both the story-world and its interpretation of Batman, without having to go through another tired origin story. It’s an episode that is worthy of its place as the beginning of the DC Animated Universe and provides a great introduction to Batman: The Animated Series.