Cartoonist and writer Paul Ryan passed away yesterday at the age of 66. Ryan is known for his contributions for both Marvel and DC Comics from the mid-1980’s to the early 2000’s, as well as the syndicated comic strip, The Phantom, that he has worked on since the mid-2000’s. The Massachusetts native was a member of the United States National Guard and a graduate of the Massachusetts College of Arts. Ryan’s cousin, Chad Callanan, posted on Facebook: 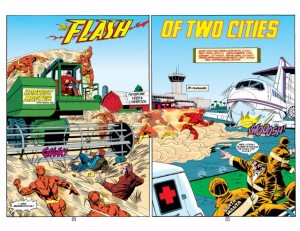 “It is with sad news I report the passing of my cousin Paul. Chances are you were touched by him in your lifetime as he was the cartoonist for some of the most well known and beloved characters in the world. From Spider-Man, Thor, Iron Man, The Phantom to the Fantastic Four, most of which made it to the big screen and Hollywood. He was a true giant and artist, who achieved more success in his short life than any one of us would ever know in ten lifetimes. But he was also my friend and that was good enough.”

Mark Waid, who had worked with Ryan on The Flash, mentioned today on Twitter that, “Paul Ryan was a good guy and a total pro.” Collaborator Larry Hama wrote that Ryan was “…an impeccable draftsman, a solid visual storyteller, and really, really nice guy.” 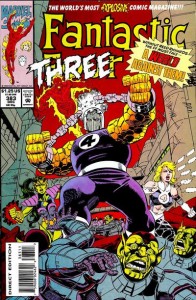 Personally, Ryan would be The Fantastic Four artist from when I was a kid. I remember that comics were not an easy thing to collect where I lived. We didn’t have a shop, and my brother and I were limited to just what convenient stores and pharmacies had carried, which wasn’t much. This didn’t stop my obsession with superheroes. This was the time of Fox Kids. The time of Batman: The Animated Series and the X-Men cartoon. My brother bought me a paperback from a book fair about comic book superheroes. In the section on The Fantastic Four was where I first saw the illustrations of Kirby and Byrne. As much as those creators would later shape my love for the team, it was the image of the cover for The Fantastic Four #383 that got my attention. My mind wandered about why The Thing was wearing the metal mask and why Sue was wearing such a skimpy outfit. The logo on the comic itself had the ‘Four’ crossed out and replaced with a ‘THREE.’ Where was Reed? Who is this alien lady that they are fighting with? I was surprisingly interested in characters that I knew absolutely nothing about. 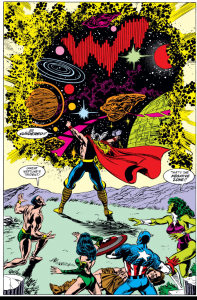 I wish I could say that this is where my love for The Fantastic Four started, but that would be a lie. It would be years until Mark Waid and Mike Wieringo, J. Michael Straczynski, and Dwayne McDuffie fueled that interest into an obsession. I began collecting back-issues of the comic, and the comics by Tom DeFalco and Paul Ryan (just as many Marvel Comics from that time period) were the easiest and cheapest to collect. I didn’t read them then, dismissing them as nineties cheese. It wasn’t until a few years ago that I finally went back and read them to discover that my judgments were presumptuous. 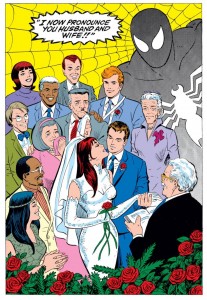 Yes, the comics were outlandish, but it’s The Fantastic Four. As over the top as some of the villains were or the outfits, there was always a level of self-awareness. While the costumes and villains would reflect the comic climate, Ryan’s artistic style remained timeless, as did the family dynamic the team was known for. During his impressive five year tenure on the book, Ryan contributed to stories that saw Reed’s two year absence from the book, Scott Lang joining the team and Sue taking over as leader. Ryan and DeFalco also collaborated on one of my favorite retcons in the book’s history- the revelation that Johnny’s then wife, Alicia Masters, had been a Skrull named Lyja. Ryan had the third longest artistic run on Fantastic Four behind Jack Kirby and John Byrne.

As much as I associate him with The Fantastic Four, others will remember him for drawing the wedding of Peter and Mary Jane, or his two years on Avengers, or his collaboration with Grant Morrison and Mark Millar on The Flash, or his contribution to Mark Gruenwald’s Squadron Supreme or D.P.7., or his decade-long run on The Phantom comic strip. His impressive career will be look upon fondly in the years to come.

Mr. Ryan is survived by his wife, Linda.