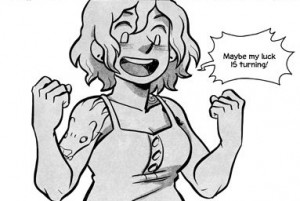 Penny Brighton has just lost her job, her apartment, and her roommate all in the same day. But don’t worry: she’s got her lucky underwear. And a grandfather clock, a legacy from her grandmother, who also gave her an extensive collection of smutty romance books. So she’s going to be okay, even though she now lives in a storage locker and works for her former roommates 12-year-old brother.

Lucky Penny is a delight. Starting out as a webcomic from johnnywander.com, this collection tells a story of the set-backs of young adulthood being overcome by sheer optimism. Penny is a bit of a beautiful disaster: her storage locker home is a fire hazard waiting to happen, she starts dating a boy just so she can use the showers at his gym, she has tattoos she doesn’t remember getting… But even through all that, she faces everything with the courage that gives the rest of the aimless, disastrous young adults hope. She convinces herself that she’s unlucky, that she causes disaster to everyone she gets close to, and thus almost destroys her relationship with not-Viking Walter, but her rebound from that is incredibly satisfying.

The storytelling and aesthetic is very reminiscent of Scott Pilgrim. Penny is clueless and unconventional, like Scott, but she’s much more active in her own narrative (unlike Scott, who seems to just react to things). Much of Penny’s story is taken up by the romance with Walter, but even with the exaggerations, the relationship feels real: two people trying to get past the horrible awkwardness and selfishness of early dating. (By the way, stop and read the titles on her bookshelf. The references to smutty romance are basically the best.) Yuko Ota’s style is very manga-inspired in the way Scott Pilgrim is, with clean lines, expressive eyes, and swapping between minimalist panels and panels bursting with action. Penny’s smut-inspired daydreams are particularly fun, with Penny and Walter drawn like Harlequin romance covers.

The best thing about this book, though, is its atmosphere. There are several panels where not much happens. We just see Penny sitting outside a building smoking, or her and Walter sitting on top of the storage locker looking at the stars, or a series of creepy noises continually waking Penny up while she’s trying to sleep. In the middle of the book, to show the passage of time, the panels become Polaroid snapshots that are scattered, giving brief glimpses of a relationship falling apart while Penny withdraws into herself. For a comic that seems so wacky (and it really does get hilarious), the quiet, atmospheric moments lend a poignancy that we can all relate to.

Buy this comic right now. Buy some for your friends, while you’re at it. It’s a quick read, but it’s something that you’re going to reread several times.