After writing the Kickstart This – Alter Life article, I have been following this project pretty closely to stay in the loop about it progress.  The thought of traveling to a parallel universe when you die is such an interesting and different take on the whole theory of life after death; I could not pass it up.  I decide I still had a few unanswered questions about the project, which I needed answered.  I caught up with the creator of Alter-Life, Caleb Thusat, to get some of these questions answered.

Welcome, Caleb, and thank you for meeting with me to talk about your project.

Thank you for having me.

Let dig in.  You mentioned, on the Kickstarter site, a little bit about yourself and your time in college.  Tell me a little bit more about how you came to choose your major in college.

I went to college without a clue as to what I wanted to do with myself. I basically went because that’s what I thought I was supposed to do. After a year of being “undecided” I found out that Bowling Green had a popular culture department and was one of the only colleges at the time that let you major in popular culture. After taking a few courses about music and film in relation to culture, I decided this was what I wanted to learn about. Theories on how Disney affects our culture, meanings behind popular films and song lyrics, this all was super intriguing to me. I also truly loved the idea of filmmaking and the collaborative process, so I focused on film and music. Honestly, I didn’t really think about what I would do with the education I was getting at the time, but I knew it would give me great insight on the world and even greater ideas for writing.

Well, it sounds like you are figuring it out now.  Knowing you focused on music and film how did you find comic books?

Comic books came later. I basically grew up in a movie theater. I love movies, and some of my favorites when I was younger were Christopher Reeves Superman and Keaton’s Batman. The small town I grew up in didn’t have a theater or even a comic book store, so I really learned about comic book characters through movies, cartoons, and video games. I read some Frank Miller here and there, but I didn’t really dig into reading comics until someone handed me a copy of Alan Moore’s Watchmen. That book showed me what a writer can do with the medium of comics, and it really made me realize I was missing out on a world of amazing writing and artistic collaboration. Moore has a depth to his writing that astounded me. He can not only entertain, be make you truly think about the world around you.

Now that you have found comic books what is your favorite to read?

Favorite type or favorite single comic to read, over and over?

That’s tough. I really like Superman and Batman stories, but I love to read random, smaller titles too. Scott Snyder for instance, writes amazing Batman stories, but Wytches is something that sticks with you. Probably one of the best horror comics I’ve read in a while. Currently my favorite series has to be Saga. I love science fiction and the new Star Wars series is great fun too, but Brian K. Vaughan’s Saga has everything I love about comics. Saga is also another brilliant story that would be insane to make into a movie or series.

It sounds like you are becoming quite the comic book enthusiast.  Since you have discovered comics who have become some of your favorite superheroes?

Batman and Superman are my favorites really. Both can be written with such deep meaning and purpose that they never get old. I am always excited to see how a new writer builds their character. It’s always familiar but never exactly the same. There is a beauty in characters that can develop to reflect the culture and time we are living in, and Superman and Batman will always be relevant.

Do you have a favorite comic book writer(s) or creative team(s)?

Well, Alan Moore as a said before. I also love Frank Miller, Jeph Loeb, and Scott Snyder. They all bring great stories to the Batman world. I have been really getting into Ed Brusker and Sean Phillips lately. Criminal, Fatale, and The Fade Out are all great. I think I’m just a sucker for the noir art style and a good crime story. God, there are a lot more I would mention too, but I guess I have to also say Brian Azzarello and Eduardo Risso is one of my favorite creative teams. 100 bullets is nothing short of brilliant and anything those two work on together is well worth a read. Gorgeous art too. I love simple, modern looking art too. I pretty much buy a copy of anything Jae Lee has a hand in. 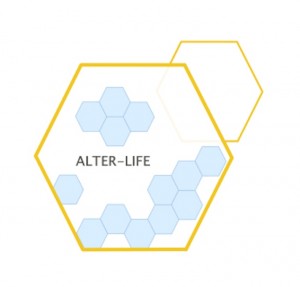 Alter-Life is a story I originally thought of when I was 18. My father took me to Europe as a graduation gift and we were up on the Eiffel Tower when I had a weird moment of clarity. I looked around and thought, “what the hell am I doing up here?” I thought about what would happen if this thing collapsed. Would I die? What happens when I die? What if I can’t die? I actually thought, in some parallel world, this thing is collapsing and crushing me right now.

Death is a universal fear. Something everyone can relate to. Some people think you go to heaven when you die, others go to hell, or maybe there is nothing. So, Alter-Life was born out of my fear of death I suppose. My original idea was that when someone dies, their consciousness leaves this existence and jumps to one of their infinite other existences. True death comes only when all of those realities cease to exist. Issue 1 of Alter-Life is about a man, Jake, discovering that there is something after death, something he doesn’t understand yet. Jake is confused and lost in the first issue. I mean, if you thought you died and found yourself alive again, what would you be thinking?

How did you come up with the idea for Jack?  Are there parts of you in Jack or is he just supposed to be the Everyman? 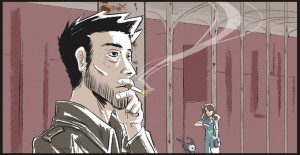 Jake actually. But yes. Jake is a lot of me, a little of Rob Gordon from High Fidelity, and maybe some other people here and there. I think Jake is the personification of my fears and dark thoughts. He the most tragic version of me I could create. I also think Jake is an “average joe.” He’s meant to be relatable. Someone that anyone can sympathize with and say, “I know how he feels.” Granted, his tragedy is amplified to make for a much more interesting character, but I hope he is someone people can relate to.

Where do you envision this series going and where do you find inspiration?

There are actually two ways I have written this series. One is a limited series with a total of 5 or 6 issues. The second way is an ongoing series. It’s written in a way that I could keep it going for a long time, but I think the Limited series will be a better story. I don’t want to spoiler where the actual story is going, but let’s just say that Jake is in for quite a few twists and turns.

Inspiration is everywhere. Movies, music, books, comics, video games. I try to keep my ears and eyes open all of the time because you never know what is going to spark the next great idea.

Now is this the first comic book you have written or just the first one you are trying to publish?

This is my first comic book, and my first attempt at publishing. I have been writing screenplays and producing independent films for 10 years or so now, but I have decided last year that my ideas are too big for independent film. They would cost a ridiculous amount to produce, and it’s hard to get the funding for film projects. Comics are a much smaller, cleaner production process. You have a writer or two and at most a couple artists. In the case of Alter-Life, it is just me and Katrina E. Kunstmann. The simplicity of comic writing and producing is what attracted me to bring my ideas to comics. I just hope to do well enough on this first one that I can do more and more. I actually have three different series first issues already written, they just need art and an audience!

Do you write any comics just for fun?

One of my other comics is “Zed.” I wrote it after writing my two other first issues because it is much more fun and light-hearted. Alter-Life is deep, and writing for Jake, the main character, can be a little depressing. He’s a sad guy with a tragic past, so putting my head in his state-of-mind can be tough. Zed, on the other hand, is a zombie story. I know, zombies are overused, but I thought of a great way to make a zombie into a superhero. The story actually takes place in a Post-Post-Apocalyptic setting. The zombie outbreak is already over and Zed is the last living zombie. I don’t want to give too much away, but it’s got an iZombie vibe. Zed has a partner and he has to keep his identity secret or people will want to kill him. I just thought it was a clever way to use zombies in a less-serious way.

I have to say I think you have been doing a great job in the last couple of weeks getting this campaign to the public.  I am cheering and look forward to seeing this get funded but I have to ask, if this campaign doesn’t get funded have you figured out what you are going to do next?

At this point I am focusing all of my attention on the Kickstarter, so I hope my efforts aren’t in vain. It’ll get funded. If it doesn’t I’ll figure it out, but it’ll get funded.

Well, Caleb, I want to thank you again for taking the time to speak with me and we wish you the best of luck.

If you haven’t checked out his campaign yet, you can go to the Alter-Life Kickstarter by clicking here.  You can also follow the project on Twitter at @AlterLifeComic or follow Caleb Thusat at @calebthusat.  Again, check it out, take a look, and support the cause.  You won’t be sorry!