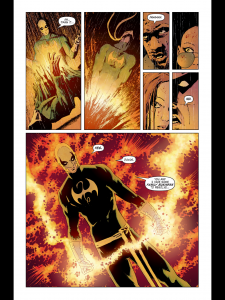 Do you know how bad I am at karate? When I was six, my dad told me he had signed me up for karate classes. I remember thinking to myself that my days were numbered because surely I would not survive karate class. Well, I did, but six weeks later my not so subtle hints to my father were finally recognized and I left the dojo to never return. I feel like every lame American kid like me has that moment when they become really into martial arts. Needless to say, my moment didn’t occur when I was six. As I grew older I watched Crouching Tiger Hidden Dragon, and nothing. Enter the Dragon didn’t do it. Not Bruce Lee, not Jackie Chan, not Jet Li, not Chow Yun-fat, not even freakin’ Karate Kid.  I didn’t get it. By the time I got to college, I thought it wasn’t going to happen. Then my sophomore year, I bought Immortal Iron Fist #1. I finally, late in life, got my martial arts thing.

I hope I wasn’t the only one that this comic truly spoke to. I doubt I was because of how large of a following it has had. Matt Fraction and Ed Brubaker and David Aja, with the assistance of many guest artist, tapped into something on a small level made an Arkansan college student get into martial arts, but on a more important larger scale ushered in a new generation of serialized comic books. I see Immortal Iron Fist as the comic that the Fractions, Snyders, Remenders had the tourch passed to them by the Bendises, Ruckas, Johnses and Brubakers. The beginning of the generation where I got really into comics, that had to find a way to be unique yet accommodating in a world where Marvel movies were the biggest thing around, and for the first time in 20 years Image comics would become a serious number three in the Diamond Charts. 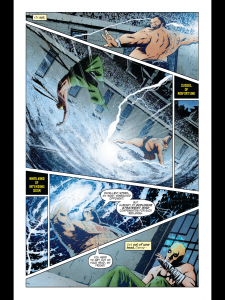 On top of all of that The Immortal Iron Fist is just undeniably cool. The story of the Iron Fist of the early 20th century meeting the current mantle is cool. The Bloodsport/Mortal Kombat-esque tournament in Ku’n-Lun is cool, and the story of Danny’s father might be the most interesting thing that had happen to character in his thirty four year history. Aja’s refreshing style and his ability to design an action scene combine with Brubaker’s longform storytelling and Faction’s developing talent with dialogue quickly became one of the more important runs of the 2000s. Remember when Hawkeye took the comic book world by storm a few years ago? There were a few of us who were happy about that, but not really surprised.

If you listened last week to our Batgirl episode, thanks again. If not, please do. Next week’s episode is going to be just as much fun. I want to thank those that have been listening to the podcast and have been reading these articles. Your feedback has been so important to us. Please keep it up. Mara and I will be recording additional episodes for those listeners who are sponsoring Talking Comics through Patreon. We want to extend an additional gesture of gratitude to these supporters. To all of our listeners: happy reading and I hope you will join us on Friday!

You can listen to our previous episode on Bryan Q. Miller’s Batgirl here and also on iTunes.